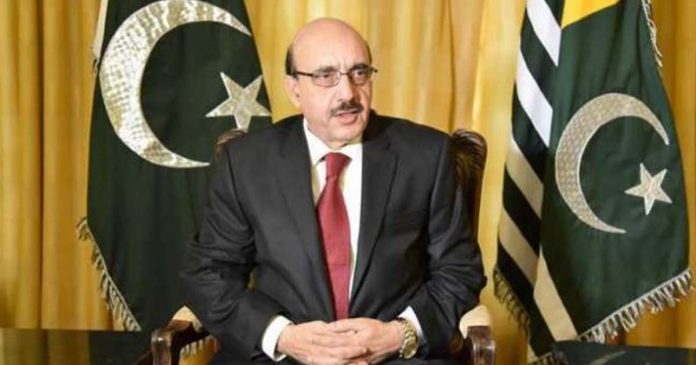 ISLAMABAD, Jul 19 (APP):Azad Jammu and Kashmir (AJK) President Sardar Masood Khan on Monday said the resolution of accession to Pakistan adopted on July 19, 1947 was a referendum through which the Kashmiri people had decided their political destiny.

“The day of July 19 is an important day in the history of Kashmir as on this day in 1947, accession to Pakistan resolution was adopted under the leadership of Ghazi-e- Millat Sardar Muhammad Ibrahim Khan by representatives of Kashmiri people from the entire state and decided to attach their destiny with Pakistan,” he asserted.

He was addressing an online conference organized by the Islamabad Institute of Conflict Resolution (IICR) titled “Kashmir: A Saga of Suffering”, according to a press release.
The event was also addressed by Syed Nasir Qadri, an expert on international law, Ms Noorin Farooq Ibrahim, a member of the Parliamentary Special Committee on Kashmir, and IICR Executive Director Ms Saba Aslam.

The AJK president described accession to Pakistan resolution adopted by the elected representatives of Kashmir historically significant since it constituted the will of the people of Kashmir. The entire population of Kashmir through the resolution had decided to join Pakistan even before the partition of the Subcontinent, he added.

“It is a historic document that embodies the collective political thinking, sentiments, and aspirations of the people of the State of Jammu and Kashmir,” he asserted.

Sardar Masood said the people of Jammu and Kashmir through the resolution had set their political and ideological direction by expressing their will in unambiguous and unequivocal terms.”

He added that the people of Jammu and Kashmir had decided to join Pakistan not only because of their natural, historical, geographical, trade and economic ties with the areas that were about to become part of Pakistan, but also because of their shared common vision and dreams for the future.

Highlighting the pain and sufferings of the Kashmiri people, the AJK president said the dark night of suffering on the Kashmiris, which started in October 1947 after the Indian Army entered Jammu and Kashmir and occupied a large part of the state, had not ended till today.

He said it was India that had taken the Kashmir issue to the United Nations and through the Security Council had declared a ceasefire in Kashmir in 1949. Delhi at that time promised that the Kashmiris would be given an opportunity to decide their political future through a UN-sponsored referendum but after 73 years, instead of fulfilling the promise, it had made with the international community and the people of Kashmir, was engaged in repression and tyranny.

India’s occupation army, he added, was killing the Kashmiris, made the women tremendously suffered, arresting innocent and peaceful civilians and torturing them in the jails simply because they were peacefully demanding their freedom, liberty, and right to self-determination.

He said despite the worst repression, genocide, war crimes and the crimes against humanity, the Kashmiris’ freedom movement was continuing and now India had adopted a new tactic to settle its Hindu citizens in Kashmir to turn the majority of Kashmiris into a minority.