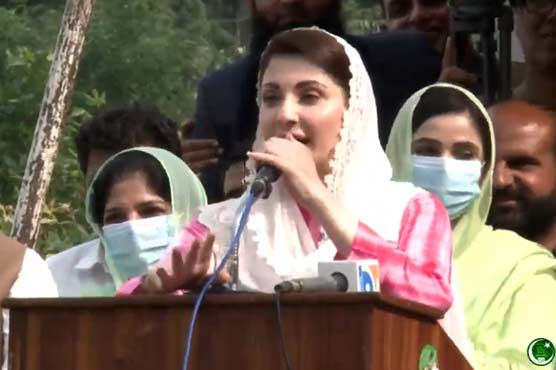 Addressing an election rally in Dhirkot area of Azad Kashmir, Maryam Nawaz claimed that the PML-N’s election campaign has become viral in Pakistan and the AJK made history by supporting them. “The PML-N will win the upcoming election of the Azad Jammu Legislative Assembly on July 25.”

“I felt happiness because Nawaz Sharif s sacrifice was not wasted. I hear only voice of the former premier wherever I go into the AJK. We have been hearing for five years that they will minus Nawaz Sharif. They should visit the Azad Kashmir because the people of Kashmir rejected them,” she maintained.

The PML-N vice president said that a ‘selected’ had come to Azad Kashmir yesterday to address public gathering adding that he may have saved his face if he had not held a rally in Bagh. The rally was flopped even spending the millions of rupees,” she added.

The daughter of former premier said that Imran had come to Azad Kashmir yesterday to seek votes at government s expense.

“They have found new money making machine in Bagh and considered that the new ATM would gather people by giving money,” she alleged.

“You must remember that you are not capable of winning more than two seats in the coming election likewise, previous election, said Maryam.