With almost no tourists visiting the world-famous Ladakh region last year due to the COVID-19 related restriction, this year thousands of tourists are visiting the region. Due to the high number of incoming tourists, construction work and various other movements, the main roads can get jammed for hours. Here is a video that shows a group of bikers taking a detour to bypass the jam.

The video by Sj Vlogs shows the journey from Sarchu to Pang. As per the video, the main road that connects the two places was completely choked. A few bikers coming from the other side told this group to take a detour and go through the river to save time. However, the river did turn out to be a great challenge for the bikers.

While heading towards the route, they crossed a small water crossing but the main crossing was a river and many other vehicles were already trying their luck. In fact, one of the vehicles got stuck near the other bank. While the bikers were judging the depth of the river and were making a strategy to cross it, a Mahindra Scorpio entered the river and successfully reached the other side. 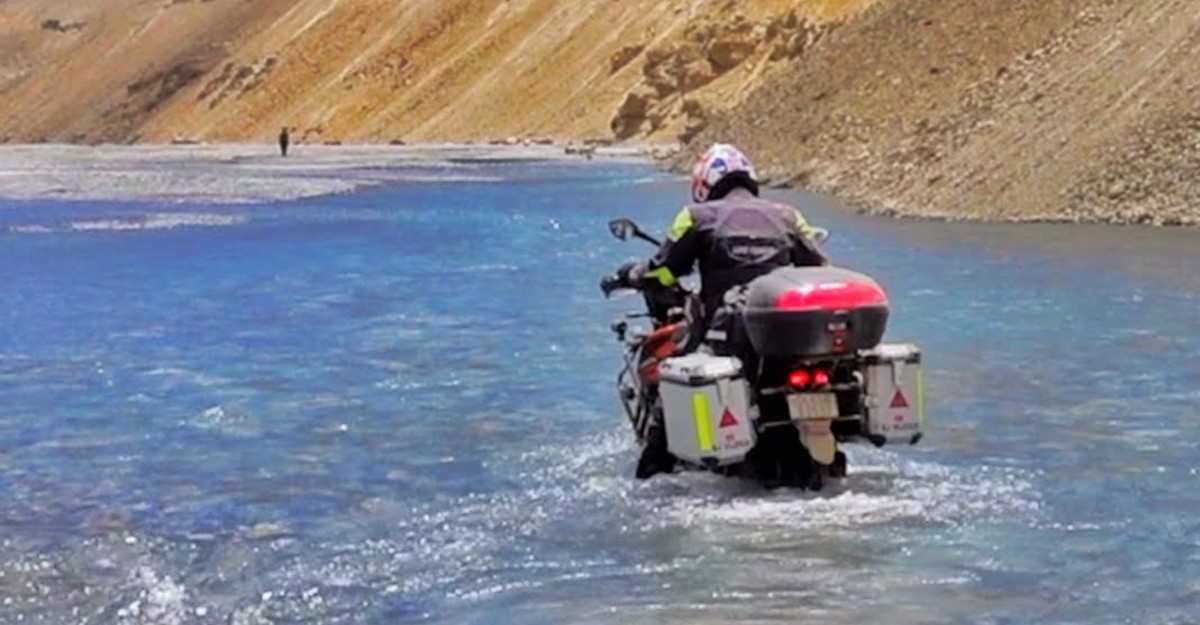 After judging the depth of the water crossing by looking at the Scorpio, the bikers enter the deep river and it sure was quite deep. First, the KTM 390 ADV entered the stream. However, the bike got stuck in the middle of the river due to the large rocks. The rider also forgot to turn off the MTC or the Motorcycle Traction Control, which is why he was not getting uninterrupted power to come out of the situation.

The video further shows that the rider on the Bajaj Dominar 400 chose to ride through the water crossing instead of riding his motorcycle. A fellow rider and another tourist help the Dominar rider to cross the river stream and it was quite uneventful.

The KTM rider then shows his riding boots and the amount of water inside. It sure may seem like fun to many but crossing a river can be extremely dangerous, especially for motorcycles. Since the rocks on the riverbed become extremely slippery, passing through it is not easy. Also, the temperature of the water is very cold.

There are numerous water crossings in the Ladakh region. One needs to be extremely careful while crossing as many get stuck around here and many accidents happen too. Since flowing water does not let you judge the depth of the crossing and see what lies underneath properly, it becomes even more dangerous.

One should plan the journey in such a way that they can cross such places early in the morning or at least before noontime. As the sun becomes stronger during the day, the flow of the water increases. It happens as the heat of the sun melts the ice and increases the flow. By evening, the currents of such crossings become the strongest.