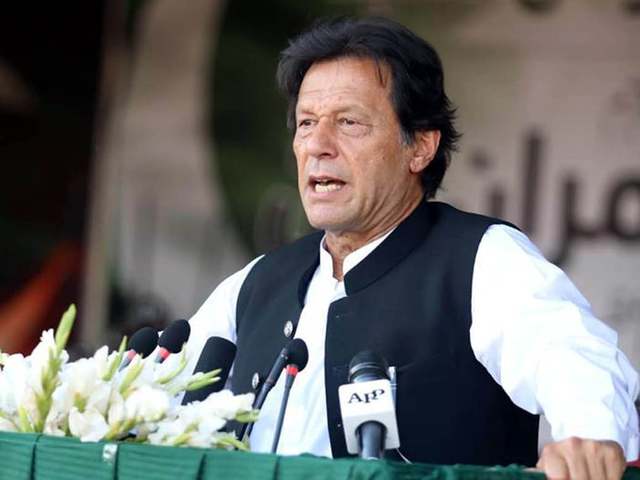 MIRPUR/BHIMBER: Prime Minister Imran Khan on Sunday said that Indian government was naive to assume Pakistani stance would be indifferent following the revocation of the special status of Kashmir on August 5.

“They thought it would be like how it was in the past as Nawaz Sharif’s government did nothing to deter Indian brutality meted out in Kashmir,” Imran Khan said while addressing the Pakistan Tehreek-e-Insaf (PTI) power show ahead of Kashmir polls in Mirpur, Azad Kashmir.

He added the national policy stayed quiet when extra-judicial killings and pallet-gun assailing were carried out on their youth.

In the preceding government, the Prime Minister said, when Nawaz Sharif visited Kashmir, he wouldn’t call on Kashmir freedom movement and All Parties Hurriyat Conference leaders to avoid risking relations with Narendra Modi. He said the ex-PM ordered his foreign ministry to avoid releasing statements against India.

He claimed before his stance, nobody recalled the Indian atrocities in Kashmir, and added that he voiced this concern across the world. “We have told the world how in RSS-ridden India the people in Kashmir do not have rights,” he said.

Hardly an hour ahead of this address, the Prime Minister also addressed the Bhimber power show, Prime Minister Imran Khan said he wanted that Pakistan’s passport had respect in the world.

The prime minister said there were two superpowers at the time of Holy Prophet (PBUH): Persia and the Roman empire. “But 13 years after Prophet’s migration to Medina, one of the superpowers eclipsed,” he added.

Prime Minister Imran Khan said nobody had respect for the person who begged from people. “Only that person is respected who bows before The Almighty Allah,” he asserted. He said the only leader Pakistan had in its entire history was Quaid-e-Azam Muhammad Ali Jinnah. “Even his detractors used to speak of him highly,” he commented.

The Prime Minister urged people to cast votes in the favour of those candidates who have a clean past. He said that it was his dream to put the country on the right path and this is the only way through which we can develop it.

Imran Khan said the nation is strived to make Pakistan a great country as the world always respects a self-reliant nation. He said past rulers mercilessly plundered country’s wealth and took refuge abroad.

He taunted former prime minister and Pakistan Muslim League-Nawaz (PML-N) supremo for fleeing abroad by making his sickness an excuse. “Remember he watched a polo match in London,” he said, and added, “Polo is an extremely expensive sport. Only kings and rich people can afford it,” he added.

PM said nowhere in the world you would find a country, with corrupt leaders at its head, prosperous. He said nations rose only when they stood for justice. “With your support, I will defeat these mafias plundering the country’s resources,” he vowed while referring to the PML-N and Pakistan People’s Party (PPP). The prime minister said the entire Muslim world was proud of the way Kashmiris had braved the atrocities of Indian Prime Minister Narendra Modi.

PM Imran expressed the hope that soon Kashmir would be liberated from the shackles of India.

Imran Khan has asked former prime minister Nawaz Sharif and his other family members, residing in the United Kingdom, to return home and face trials as judiciary in the country was fully independent.

“Judiciary in the country is fully independent as Imran Khan did not attack courts or contact judges for seeking favourable judgements. I ask them a question why are they sitting outside the country if they are honest and truthful, why they fear facing courts?” the prime minister said.

The prime minister said even Ishaq Dar, former finance minister, his son, Nawaz’s sons, and son in law of Shehbaz Sharif had been absconding in London to avoid accountability.

He said due to independent judiciary and accountability process, even PTI’s ministers were not spared. The courts and National Accountability Bureau (NAB) were free and not under any control, he added. “If these leaders are honest, then why they fear from the justice system,” the prime minister said.

The Prime Minister said he saluted the courage and determination of the people for turning up at the jalsa venue in such large numbers despite intense heat.

Seeing a large number of people without observing Standard Operating Procedures against Covid-19 pandemic, Imran Khan appealed the people to continue wearing mask and observing SOPs to prevent spread of the virus. He said he dreaded what if later it divulges that people fall sick after this rally and added he is really concerned about their health. Nevertheless, going further he told them he has played cricket under the sun his entire life but even he sweated profusely on the stage today.

“I respect your passion and vigour despite the scorching weather and I wish to make your futures bright so that whoever holds our passport is regarded with great respect,” the PM told people.