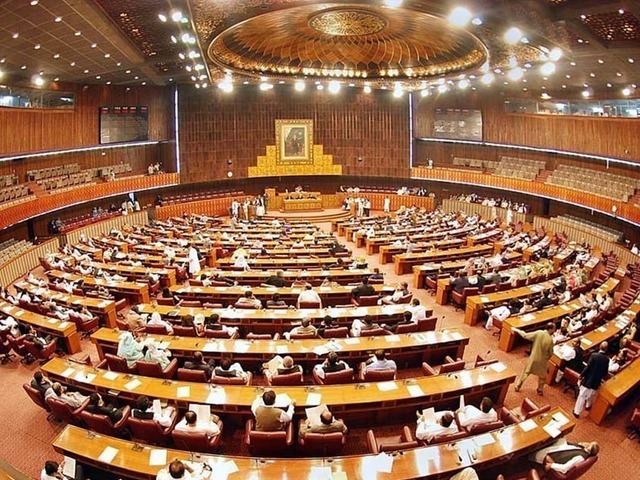 ISLAMABAD: The government has reportedly altered rules to prevent “misuse” of production orders of Members of Parliament issued by the Speaker(s) of National and Provincial Assemblies.

On July 6, 2021, during a discussion on a 2019 case, implementation on which is still pending, Minister for Law and Justice, Dr Faroogh Naseem informed the Federal Cabinet that the draft amendments in relevant rules to obviate the possibility of misuse of Production Order(s) issued by the Speaker(s) were ready and would be issued this week.

Most of the parliamentarians who are facing NAB cases are on bail except MNAs Syed Khurshid Ahmed Shah and Ali Wazir. The latter is under custody in a case not related to corruption.

Briefing the forum on implementation status of its decisions, Cabinet Division stated that 141 Cabinet meetings had been held during the tenure of the present government, wherein 3776 decisions in total were taken. Out of these, 3444 had been implemented, 66 were under process, 142 related to MoUs awaiting approval/ratification by partner governments and 123 were delayed beyond ninety days. The status of 23 “most important delayed decisions” was presented to the Cabinet members.

During discussion on the case which pertained to filing reference in the Supreme Court under Article 186 of the Constitution to seek clarity about bar on parliamentarians to be on the Board of Directors of Public Sector Entities, Minister for Law & Justice noted that the draft reference was ready but requested separate meeting with the Prime Minister to discuss certain issues prior to its filing. A member pointed out that due to the apprehension of the Law Division that the relevant laws provided for membership of parliamentarians on the Boards might attract disqualification under Article 63, most of the positions were lying vacant, rendering the Boards dysfunctional.

On the Case No. 480/21/2019, it was noted that the Cabinet had directed Law Division and Attorney General for Pakistan to devise a comprehensive strategy to avoid international litigations and the financial liabilities accrued in consequence, but the decision had not yet been implemented. Minister for Law stated that work on International Law Cell had been done with the support of Attorney General’s Office, Ministry of Foreign Affairs Division and National Security Adviser, but it needed to be finalized. The members underscored the importance of having a structure and necessary expertise to effectively deal with international litigations. It was stressed that a strategy be finalized and presented in the next Cabinet meeting.

Aviation Division said the decision of the Cabinet in Case No. 96-2(b)/04/2021 would be partially implemented as the work on converting Skardu Airport to international airport was almost complete and the opening had been scheduled for 14th August 2021. A suggestion was given to install all-weather landing instruments at the Skardu and Gilgit Airports, which would help realize the tourism potential of the northern areas. The Cabinet desired that a proposal to this effect be presented to the Cabinet within three months. The Cabinet also directed that Aviation Division shall take necessary steps to ensure that persons with disabilities have adequate access to airport facilities and services.

Special Assistant to the Prime Minister on Establishment apprised that the committee constituted by the Cabinet in Case No. 187/0E3/2020 had given its recommendations on checking the mushroom growth of sub-standard private testing agencies and a summary for the Prime Minister was moved through the Law Division, which was still pending in that Division. The Minister for Law & Justice briefed the Cabinet of the Islamabad High Court’s decision disbanding the use of private testing services except for screening purposes where clear selection process was not mentioned. The Cabinet directed Law & Justice Division to tender its opinion within one week.

During a discussion on Case No. 81/04/2020, the Cabinet directed the Finance Division to take the lead both on the Hajj Fund and Government Employees Pension Fund issues.

Secretary, Interior Division informed that new DG, FIA was now in place and would be ready to make a presentation to the Cabinet on plans to build FIA’s capacity as per decision of the Cabinet within two weeks.

Secretary, National Food Security & Research explained to the Cabinet that the implementation of Cabinet’s decision regarding disposal of un-serviceable aircraft of the Department of Plant Protection, had been delayed due to absence of specific Rules. He sought three months to complete the assigned task. The Cabinet directed him to dispose of the unserviceable aircraft of DPF within one month.