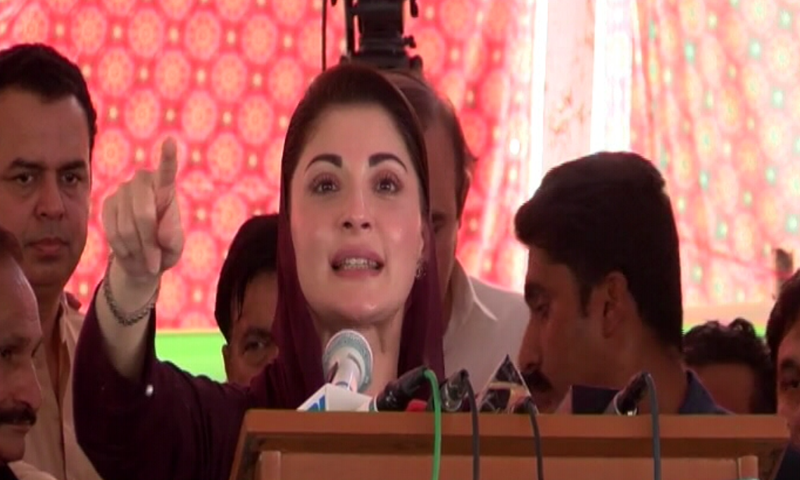 As many as 32 political and religious parties are vying in the polls — prominent among them PML-N, PPP and PTI — for the 45 direct seats of the assembly, 33 of which are located in AJK territory and 12 in Pakistan.

Addressing a campaign rally in AJK’s Islamgarh, Maryam said: “Remember [this] vote thieves, if you steal the election, then the Kashmiris won’t let it slide. This is not 2018 […] when you stole the election and the PML-N silently accepted it.

“This is no longer that same PML-N. This is the PML-N from Daska, which caught vote thieves during the fog and presented them before the people.” Maryam was referring to the by-election in the Daska (NA-75) constituency that was marred by violence, rigging and the disappearance of over 20 presiding officers.

“I warn vote thieves who are lurking in wait for the AJK election that if you try to stop the PML-N, try to change [balloting] boxes and change the results, then something very bad is going to happen,” Maryam said.

The PML-N vice president called upon the people to protect their votes. Addressing the crowd, she told the people to wait at the polling stations until they receive authenticated results on polling day.

Maryam claimed that the PML-N had already won the election and the people of AJK had made the decision in the party’s favour. “I promise you that there will be a [new] dawn of development in AJK on July 26.”

Addressing the prime minister’s visit to Bagh for the PTI’s election campaign, Maryam claimed he was going there “because he has found an ATM there, a very rich person. That is why he (Prime Minister Imran Khan) is starting his election campaign from there. Just like flies gather on honey, Imran Khan goes to those with money in their pockets.”

She asked Kashmiris to not welcome the premier with “eggs and tomatoes” but flower garlands with plaques on them that say “number one flour, sugar, electricity thief”.

Maryam criticised the premier’s handling of the Kashmir issue and condemned the aerial firing by Minister for Kashmir Affairs and Gilgit-Baltistan Ali Amin Khan Gandapur’s guards during his visit to Khun Bandway.

Addressing the recent Dasu bus tragedy, she said it was a “moment of shame” that the Chinese were coming to Pakistan to investigate the incident whereas they came with various development projects during the PML-N’s tenure.

“Imran Khan when you give NRO (amnesty) to Asim Saleem Bajwa and make him CPEC in-charge by appointing him on a salary of Rs3-4 million and keep all your attention on enmity with Nawaz Sharif then terrorism incident are bound to happen in Pakistan,” she said.

She also criticised the premier for inaugurating various road and motorway projects she claimed were initiated by the PML-N, adding that Prime Minister Imran Khan had once derided such projects by saying “nations don’t develop from making roads and motorways.”