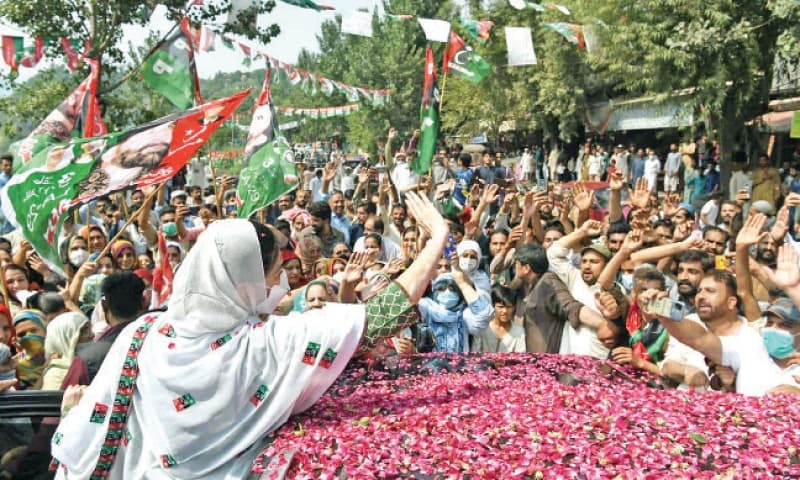 MUZAFFARABAD: In the absence of Pakistan Peoples Party chairman Bilawal Bhutto Zardari, his younger sister Aseefa Bhutto Zardari joined the party’s electioneering campaign in Azad Jammu and Kashmir on Saturday, as PML-N vice-president Maryam Nawaz claimed that the people of AJK had already made the decision in her party’s favour.

Ms Bhutto-Zardari asked the party workers who had gathered at Kohala, the gateway to the AJK capital, to go door to door and tell the people about the PPP sacrifices.

“We have given sacrifices of lives for the rights of the people and we are ready to continue our struggle for the democratic rights of Kashmir,” she said.

In Patikka, towards the northeast of Muzaffarabad, she told a public meeting that Kashmir was close to her heart as the PPP was founded by Shaheed Zulfikar Ali Bhutto on Kashmir issue and her mother was the voice for Kashmir all over the world.

Maryam claims people have made decision in PML-N’s favour

“Now chairman Bilawal will become the voice of Kashmir and will defend your rights,” she asserted.

Referring to Prime Minister Imran Khan, Ms Bhutto-Zardari said some people were making tall claims during their visits to AJK, but when Mr Modi attacked Kashmir these people were nowhere to be seen.

Listing the PPP’s achievements, she said the party’s election manifesto for AJK was people-friendly.

“We have prioritised education, health, clean drinking water in this manifesto,” she said.

“Remember, if you steal the elections then the Kashmiris will not let it slide. This is not 2018 when you had stolen the election and the PML-N silently accepted it,” she said at an election rally in Mirpur division in an apparent reference to the PTI.

She said it was a different PML-N that the “vote thieves” would have to face.

“This is the PML-N from Daska, which caught vote thieves during the fog and presented them before the people,” she said in a reference to the by-election in NA-75.

“I warn vote thieves … if you tried to stop the PML-N, to change (ballot) boxes and the results, then something very bad is going to happen,” Ms Nawaz said and asked the people not to leave the polling stations without receiving authenticated results on the polling day.

The PML-N vice president claimed that since the people of AJK had made the decision in her party’s favour it had already won the elections.

She called upon the people to refrain from voting for the turncoats who had switched loyalties ahead of elections.

Referring to Prime Minister Imran Khan’s visit to Bagh for the PTI’s election campaign, Ms Nawaz sarcastically commented that he was going there because he had found an “ATM” there, an apparent reference to PTI candidate from Bagh city Sardar Tanveer Ilyas who owns a big shopping complex in Islamabad.

“Imran Khan when you give NRO (amnesty) to Asim Saleem Bajwa and make him CPEC in-charge by appointing him on a hefty salary and keep all your attention on enmity with Nawaz Sharif, then terrorism incidents are bound to happen in Pakistan,” she said while referring to the Dasu bus tragedy.