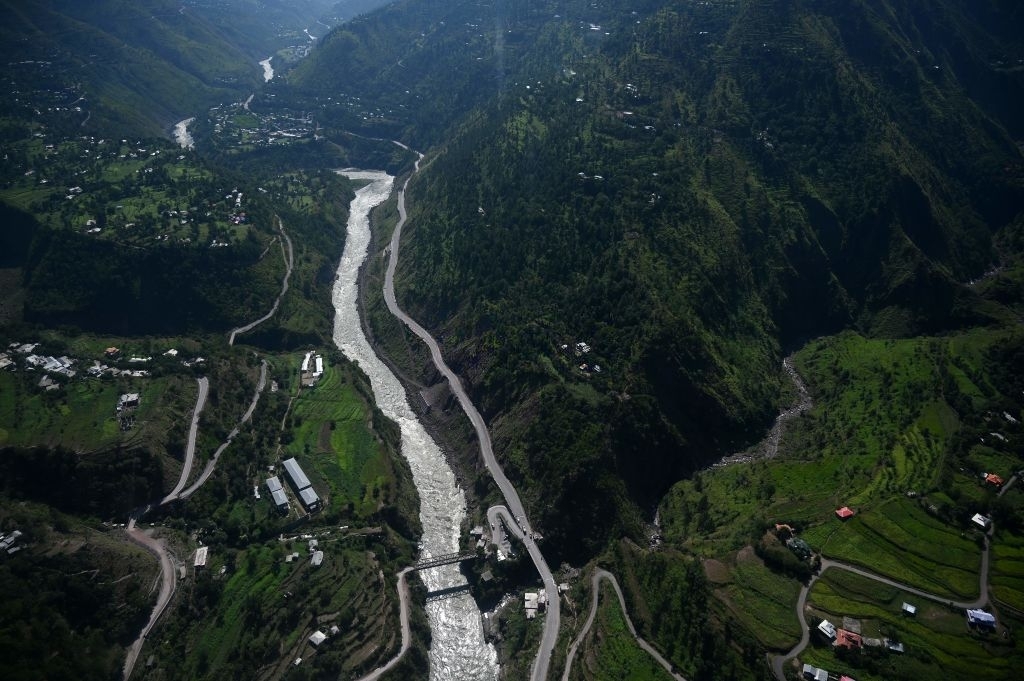 MUZAFFARABAD: On hot summer evenings, Khawaja Maqbool Hadieri’s family used to sit on their home’s balcony and relish the cool breeze wafting off the nearby Neelum river.

But these days, after 80 percent of the river’s flow was diverted for hydropower, “we’re sweating while sitting there, even using an electric fan,” Hadieri, 70, a resident of the Azad Jammu and Kashmir capital, told the Thomson Reuters Foundation.

But the diversions are also causing a range of problems, from hotter urban temperatures to water shortages and sewage buildups in riverbeds once rushing with water.

In Muzaffarabad, the diversion of the Neelum’s waters in 2018, to generate almost a gigawatt of power, has driven protests from residents. Even environmental officials acknowledge that since the change the city of more than 190,000 is hotter during the summer

Now officials are also planning to divert the second river running through the city — the Jhelum — for another hydropower project, leading to protests and warnings about the project’s environmental implications for the state capital.

“Water flowing in the rivers should not go waste and should be tapped for the wellbeing of people – but river diversions should be avoided,” urged Raja Abbas Khan, the former head of the Azad Jammu and Kashmir Environmental Protection Agency.

Shafiq Abbasi the current deputy director of the EPA, said the Neelum river’s icy mountain snowmelt once worked as an effective heat sink for the city, with residents thronging to its banks during summer high temperatures.

But since the diversion its capacity to absorb heat has more than halved in the hot May to August summer months, he said.

Faisal Jameel, a businessman and member of a campaign to protect Muzaffarabad’s two rivers, said authorities needed to shore up water supplies, solid waste disposal and sewage treatment in response to the flow reduction in the Neelum.

After citizen protests, the Water and Power Development Authority, which manages the power project, in 2019 provided funds for the Azad Jammu and Kashmir government to try to mitigate the problems.

But a much-needed solid waste disposal plant for the area was never developed, because of a lack of local expertise, he said.

As a result, the state environmental protection agency has withheld compliance certification of the efforts, saying they have not been completed, said Adnan Khurshid, director general of the provincial EPA.

Environmental advocates say the planned diversion of the Jhelum river, to power a 1.1-gigawatt hydropower plant that is part of the China-Pakistan Economic Corridor project, is a step too far for Muzaffarabad.

Protesters camped for two months near the confluence of the two rivers in the capital have successfully pressured the state prime minister to raise concerns in Islamabad about the Kohala Hydropower Project.

The prime minister has since directed national water resources officials and others to visit the project site to look at potential environmental impacts of the diversion.

State officials said an in-depth study on the potential environmental impacts of the project has not been carried out.

Meanwhile, summer average temperatures in and around Muzaffarabad have risen 4-5 degrees Celsius (7-9 degrees Fahrenheit) since the Neelum diversion, they said.

They believe a new study is needed to look at how to maintain sufficient river flow through the city and to consider the long-standing problems of solid waste and sewage dumping into the Neelum.

Bashir Ur Rehman Kant, the dean of health sciences at the University of Azad Jammu and Kashmir in Muzaffarabad, said there is no doubt the river diversion has led to a smellier riverbed and hotter summer temperatures.

More hydropower is needed from the state’s rivers, he said — but cracking down on waste disposal into the diminished rivers could help solve some of the problems associated with lower flows.

“For God’s sake, please stop dumping into the river and set up a disposal system for solid waste. It never happens elsewhere in the world that waste is dumped into the river,” Kant said.

Khan, the former EPA head, agreed that “water flowing in the rivers should not go waste and should be tapped for the well-being of people”.

But he said hydropower projects should not be designed to include river diversions, particularly as climate change brings rising temperatures and a growing need for cooling.

He said diversion of the Muzaffarabad’s second river would be “calamitous”.

Technical experts in the state said large-scale hydropower projects are not feasible without diverting rivers.

However, Khan said setting up a series of smaller hydropower projects along the state’s glacier-fed rivers and tributaries could produce enough power without so many environmental consequences.

Haidari, whose family misses their cool evenings on the balcony, said he agreed.

“We don’t oppose hydropower projects but they should not be built on a cost to the environment,” he said.