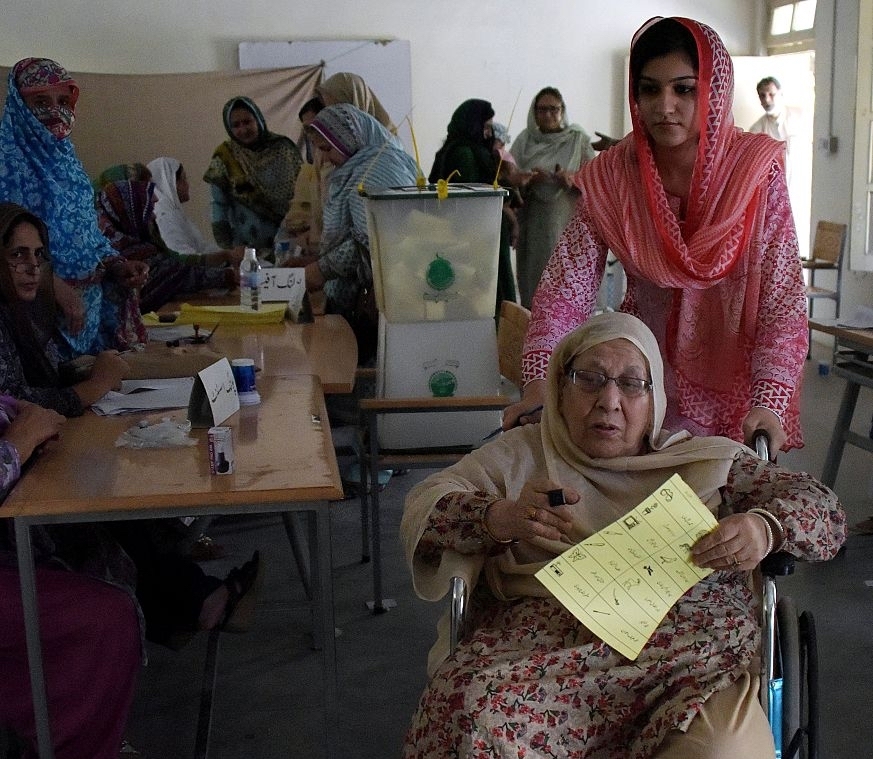 ISLAMABAD: Perched in lofty mountains, the scenic city of Muzaffarabad, capital of Azad Jammu and Kashmir, is festooned with billboards, banners, and pictures of leaders and candidates.

The election fever has taken over the region, which is going to elect regional assembly on July 25.

Jammu and Kashmir is held by India and Pakistan in parts and claimed both in full. A small sliver of land is also held by China.

Since India revoked autonomy and divided the part that it is holding into two centrally administered territories on August 5, 2019, elections in Azad Kashmir have attained considerable significance.

Over 3.2 million voters will elect a 53-member assembly for a five-year term. Out of 53 seats, 45 are general, while eight are reserved for women, technocrats, and religious scholars.

The city located at the confluence of Neelam and Jhelum rivers looks in a celebration mood, with enthusiastic activists of different political parties roaming around with flags and banners to exhibit their prowess.

There is a festive look at the city’s famous Azaadi Chowk (freedom roundabout) — a replica of historic Lal Chowk (Red Square) located 125 kilometres (77 miles) away across the Line of Control (LoC) in Srinagar, the capital of Indian-occupied Kashmir.

Residents in small villages along the 57 kilometres (35 miles) Srinagar road that along the banks of Jhelum River leads to the heavily militarised LoC — a de facto border that divides the region between Pakistan and India were seen pasting posters and banners of their respective candidates.

Neither candidates nor participants wear masks, a requirement made mandatory by the Azad Jammu and Kashmir Election Commission.

The National Command and Operations Centre, which devises the guidelines and policy for the control of the pandemic, had recommended postponement of polls till September. But the election commission after consulting political parties rejected the recommendation but called for strict observation of Covid-19 protocols.

In a last-ditch effort to woo the voters, candidates and their supporters are also going door-to-door with new promises.

Speaking to Anadolu Agency, Syed Khubaib Shah, who runs a small printing press said he has got double the orders of printing posters and banners compared to previous 2016 polls.

“It is more fanfare compared to the previous elections,” he said.

Although a staunch supporter of Pakistan Muslim League-Nawaz, his printing press is fast rolling out posters of rival Pakistan Tehreek-e-Insaf.

“I will still vote for PML-N. Business is business and politics is politics,” said Shah with a broad smile on his bearded face.

A tough contest is expected between the PTI, which is ruling Islamabad, and the PML-N, the incumbent ruling party in AJK. The PTI, however, seems to have brighter chances to form the government, according to local surveys and political estimates.

Muzzaferabad, which has nine seats out of 45 general seats, is considered a decisive battlefield to form the government.

“We are going to go with change this time,” Umer Sharif, a shopkeeper at Khawaja market told Anadolu Agency.

He was referring to Prime Minister Imran’s famous slogan tabdeeli, or change, which he introduced in his elections campaign in the 2018 general elections and managed to secure the highest number of seats.

“I think the PTI deserves a chance. We Kashmiris have tested several parties in the past but they disappointed us in terms of development and economy. Let’s give him [Imran] a chance,” he contended.

Bilal Ahmed, who runs a small business, however, foresees the next government led by the centre-left Pakistan Peoples Party.

With strong roots in Muzaffarabad, the party of slain Prime Minister Benazir Bhutto has formed the government in this part of the picturesque Himalayan region four times in the past.

“The PPP is in a strong position, mainly in Muzaffarabad. We are confident to clinch five to six seats from here,” he contended rejecting the surveys, which suggest that the party can win only one to two seats in the city.

“I don’t mind if my candidate wins or loses. I will simply go for the right candidate,” he said.

According to Raja Iftikhar, a Muzaffarabad-based political analyst, the PTI’s entry with “full force” has added the festivity to the electioneering.

“Contrary to the 2016 elections, the PTI is putting resources as it is confident to form the government,” he said.

The PTI could secure only two seats in the 2016 elections.

The region’s politics was earlier dominated by the Muslim Conference — the oldest political party of undivided Jammu and Kashmir. But with the entry of Pakistan’s main political forces into the fray, its political fortunes have declined over the years.