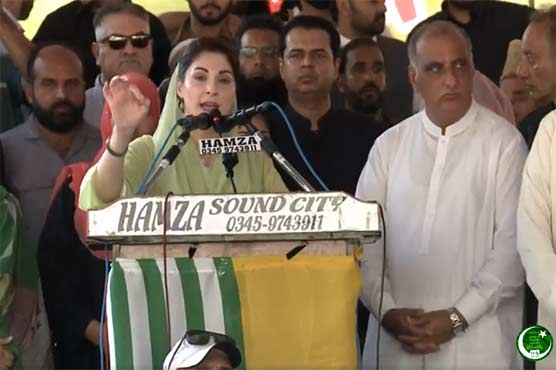 Maryam said he [Imran Khan] handed over Kashmir to Indian PM and now he has eyes on Azad Kashmir.

Addressing a rally in Pallandri on Thursday, she said that the enemies did everything with the former prime minister, adding that all state institutions oppressed him and punished also the people for supporting him.

Taking a dig at Prime Minister Imran Khan, Maryam said he [Imran Khan] handed over Kashmir to Indian PM and now he has eyes on Azad Kashmir.

Earlier, the PML-N vice president said that supporters of former prime minister Nawaz Sharif can be found in every corner of the Kashmir.

Lashing out at incumbent prime minister during an election rally, Maryam Nawaz said that these people are afraid of PML-N supremo and Imran Khan starts to shiver whenever someone takes name of Nawaz Sharif.

She also accused the premier of conspiring to ‘sale’ Kashmir and said that after offering Kashmir to India, Imran Khan’s response was to observe silence for two minutes.

The PML-N leader further said that government is planning to drop a petrol bomb on public which will affect everyone but Imran Khan does not care because he goes to office on a bicycle.

She further said that government is conspiring to mortgage projects and roads constructed by Nawaz Sharif government. If Imran Khan wins AJK elections, he will even mortgage mountains of the valley, she added.