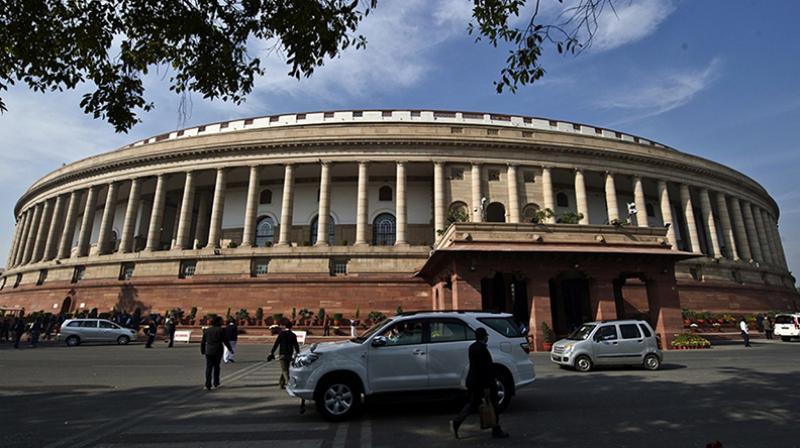 With Covid-19 advanced as an explanation when convenient but otherwise calmly ignored by the ruling establishment in order to satisfy its political instincts and ideological lusts, the Winter Session of Parliament was cancelled altogether in 2020. Covid-19, in fact, has come as a handy addition to the book of tricks, not a deadly virus to be fought tooth and nail by a sensitive government.
It is necessary to recall this today so as not to lose focus, and to bear in mind that democracy nowadays gets the treatment a family elder receives in a brutal household out to grab his wealth — the outward show of respect, while plotting to hasten his end.

If the Winter Session was a whitewash last year, the year’s Monsoon Session had lasted a mere nine days though it was scheduled for longer, and the 2020 Budget Session was ended in just eleven days. It is deemed the most important session in the parliamentary calendar and usually lasts nearly two and a half months.

With such an indifferent recent record before us, it is hard to hazard a guess about this year’s Monsoon Session, due to begin on Monday (July 19-August 13). In the event the going gets tough, the government is not above presenting contrived arguments to cut short the session or create such conditions that the Opposition parties either walk out or are bundled out by the marshals, as though they were dealing with a serious law and order problem on a dark night.
For many years before 2014, it may be recalled, this was pretty much the norm in the Gujarat Assembly. The legislature would meet hardly for one month in the year. It had been reduced to a bill-clearing warehouse in adept, steam-rolling hands. The question is: has that fate been wholly warded off by India’s Parliament?

In the coming Parliament session, the government will doubtless have a few bills to clear, but pressing issues are already brimming to the top. Will at least detailed, meaningful, discussion be permitted on these for the edification of the country even if the outcome of voting is a foregone conclusion when the government has crushing numbers.

If genuine discussion is permitted, the surging current issues are: wholesale Covid mismanagement and the shortage of vaccines which has emboldened racketeers, severe and escalating unemployment, fast spurting inflation, shocking petroleum pricing, ignoring crucial issues pertaining to agriculture and the farmers’ protest, rampant human rights violations against the poor and the minorities, the Kafkaesque use of the sedition law and UAPA, ignoring China’s capture of territory in Ladakh, and the anxiety about corruption in the Rafale deal which, under pressure, had to be officially opened for scrutiny in France after stout initial denials.

To get a measure of the true colour of our democracy, of which the
government’s conduct in Parliament is only a reflection, it is instructive to note what the external affairs ministry said when the recent death of the seriously ill 84-year-old Jesuit priest Father Stan Swamy in custody raised international concerns.

Appearing sagely, the Foreign Office spokesman noted that the human rights activist — whose life had been spent in the service of the poor — had been dealt with “according to the law of the land”. Thus, the law was made an accused, rather than those who administer it.

The propensity of this government to obfuscate and duck accountability is too glaring to escape attention, and stands in sad contrast to, say, the functioning of Parliament in Britain or the Congress in the United States, which were also hit badly by Covid-19. Besides, there is another point –indeed an essential point from the government’s perspective — the anxiety to save it the blushes on the floor of Parliament when critics and opponents demand accountability on the Covid question and interrogate its callous record across the spectrum.
In light of this, it does seem that the government’s immediate objective –to duck and mislead — was already achieved on July 7 when the Prime Minister overhauled the Union council of ministers after elaborate preparations through consultations with the BJP organisation and some trusted Cabinet colleagues. Therefore, the fate of the Monsoon Session doesn’t really matter. If it is truncated on one ground or another, then so be it.

The PM has already got what he wanted. His politics for the forthcoming period don’t depend on passing a few laws or, for that matter, his government’s inability to get a few bills through if the Opposition is noisy.

After the April-May disaster this year that highlighted the sorry spectacle of the government mismanaging the Covid-19 second wave, a time when corpses floated on the holy river Ganga, the Modi government was badly looking for ways to change the optics. This had to be done in time for the Assembly elections in some key states, especially Uttar Pradesh, due early next year. In the absence of alibis, changing the perception was the only thing to be done.

This has been duly done by making wholesale changes in the Union council of ministers — inducting new batsmen and changing the batting order, preparing spinners to open the bowling. Rain clouds have been artificially dispersed to give the impression of a sunny day. Hence, the unceremonious sacking of key Cabinet ministers to give the impression that those whose inaction brought the government a bad name have been removed, and that a forceful new team has taken the field, thanks to the Wise One.

Make no mistake — Ravi Shankar Prasad, Prakash Javadekar and Harsh Vardhan, even if they accept their fate without murmur, are the “fall guys”, as the Americans say, the scapegoats. They have been made to accept blame for everything that’s gone wrong. This was needed to keep burnished the image of the one who must not be questioned.

Remember, however, that all key decision-making in this government is heavily centralised. Not a leaf moves without instruction from on-high. Thus, for all practical purposes, the new ministers will be mouthing the lines they are given.
They will be the new praise-singers. The Monsoon Session will be a platform from which they will be formally introduced to the country as is the custom and launched to sing hosannas.

As before, critics and opponents will be booed for being anti-national, or for demoralising Covid warriors or our armed forces. If you don’t keep faith in the Blessed One, you are all of these things. Come, savour a Lilliputian democracy.