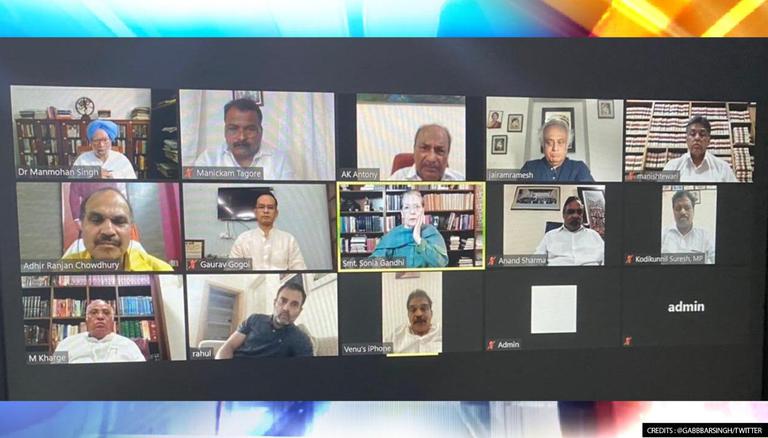 Congress leader Rahul Gandhi has come in for criticism online over his demeanour during a virtual meeting of the party’s top leaders. Launching an inquisition, a popular Twitter handle that goes by the name @GabbbarSingh (Abhishek Asthana) posted a picture of the Congress party’s virtual meeting highlighting Rahul Gandhi’s ‘inappropriate’ posture. The criticism was additionally marked by the fact that several senior party leaders were present in the meeting that was convened by party president Sonia Gandhi, with several parliamentarians including ex-Prime Minister Manmohan Singh also present in the discussion.

‘Your posture shows at what pedestal you place your seniors,’ opined the Twitter netizen, sharing the picture where Rahul Gandhi appears inclined sideways while all others are seated in a more straightforward manner.

Meanwhile, another Twitter handle contributed to the discussion by adding a sarcastic comment, “if you don’t know who the senior is, then that’s your problem.”

Where’s the problem in this picture? Everyone is presenting themselves alright in front of the “senior”.
If you don’t know who the senior is, then that’s your problem! #MBP

On the other hand, some Twitter users shared support for Rahul Gandhi by adding that he is an ‘easy target’.

Wow seriously how dumb can you get? Anything to diss at an easy target and get likes eh, Gabbar?

Another citizen wrote that, ‘there are countless examples of those who are in power right now.’

There are countless examples of those who are in power right now. But u lack spine and guts. So easy to target opposition day in and day out.

The Wednesday (July 14) meeting was to draft a strategic six-point agenda to corner the government in Parliament ahead of the monsoon session which is scheduled to begin on July 19. Identifying common grounds with the leaders of the opposition parties, Congress is expected to present arguments over a range of issues such as the government’s handling of the COVID-19 pandemic, security aspects near the LAC in Ladakh, unemployment, three bills on Farm Laws that have drawn farmers’ agitation, hike in the fuel prices, as discussed by the members in the meeting.

The senior leaders of Congress might also hold a series of pressers targeting the central ruling party on ‘inflation’ during the ongoing coronavirus pandemic. The focus will be laid on the price hikes for the fuels-the petrol, diesel, and cooking LPG gas as well as the sudden spike in the food prices. Congress leader and former Finance Minister P. Chidambaram is expected to appear for a presser in the Capital New Delhi, while leader Kamal Nath and Rajya MP Digvijaya Singh will address the conference in the state of Lucknow and Shimla, respectively.