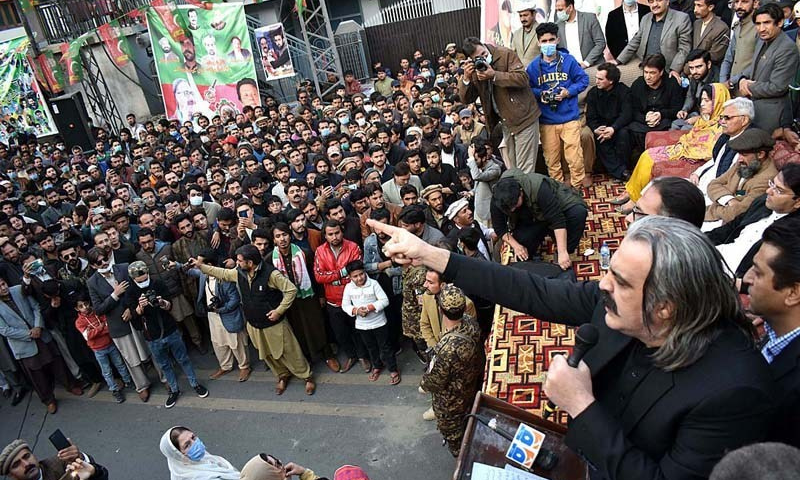 ISLAMABAD: The opposition lawmakers on Wednesday lodged a strong protest in the National Assembly and Senate over scathing remarks of a federal minister about two former prime ministers — Zulfikar Ali Bhutto and Nawaz Sharif — and warned that use of such language could lead to more confrontation and chaos.

The opposition members in the National Assembly staged a walkout and disrupted the proceedings by pointing out lack of quorum whereas the legislators in the upper house had a verbal clash when some treasury members again targeted the opposition’s leadership and tried to defend Minister for Kashmir Affairs Ali Amin Gandapur who had called the late Bhutto a “traitor” and Mr Sharif a “robber” during an election rally in Azad Jammu and Kashmir (AJK) on Tuesday.

Mr Gandapur termed the late Bhutto a “traitor” while speaking about the 1971 East Pakistan tragedy.

In the same speech, he used the word Daaku (robber) for Nawaz Sharif and his family members.

Besides the opposition, a Pakistan Tehreek-i-Insaf (PTI) MNA from Faisalabad, Raja Riaz, also “condemned” Mr Gandapur’s remarks and asked him to withdraw his words.

“If Pakistan exists on the world’s map today, it is because of the atom bomb developed by Shaheed Zulfikar Ali Bhutto,” said Mr Riaz, who is among those PPP members who had joined the PTI before the 2018 general elections.

The opposition members in both the houses of the parliament “condemned” the minister for his remarks and accused the government of leading the country towards confrontational politics.

The PPP members in their speeches in both the houses paid tributes to the late Bhutto and highlighted his various achievements, including repatriation of 90,000 Pakistani soldiers from India after the 1971 war, development of nuclear programme, making of 1973 Constitution and holding of the Islamic countries summit in Lahore in 1974.

At one stage, the opposition senators belonging to the Pakistan Peoples Party (PPP) and the Pakistan Muslim League-Nawaz (PML-N) gathered in front of the dais of Senate Chairman Sadiq Sanjrani, asking him to issue a ruling that such language should not be used against their leadership. The opposition members also chanted anti-government slogans.

The issue had been raised by PPP’s Moula Bux Chandio soon after the Question Hour, who took exception to the use of word “traitor” for Mr Bhutto, the founder of the PPP.

“How dare Gandapur call a patriotic leader like Bhutto a traitor? There must be a limit to the use of abusive language,” said PPP’s parliamentary leader in the Senate Sherry Rehman.

“How can those involved in Gilgit-Baltistan election rigging come again to steal the (AJK) elections,” she asked.

Ms Rehman regretted that the “propaganda” against late Bhutto and his family had been continuing for 50 years, adding that the minister had no knowledge of history and had “no morality”.

“The PTI government has not set a good precedent by not apologising for these comments,” she remarked.

“On one hand, you are calling OBL (Osama bin Laden) a martyr and on the other, you are saying that Shaheed Zulfikar Ali Bhutto was a traitor? This government has clearly missed a few lessons on our history,” she said.

Former Senate chairman Raza Rabbani also delivered an emotional speech and even made some personal attacks on the minister, which he later himself asked the chair to expunge from the proceedings.

Mr Rabbani was of the view that politics of calling each other bad would lead to disaster, saying that they did not need any certificate of patriotism as their political struggle was their patriotism certificate.

He said this style of politics was taking them towards destruction and could push the country towards another martial law.

Paying tributes to the former prime minister, he said late Bhutto was among those few leaders who sacrificed their lives, but did not compromise on principles.

PML-N’s parliamentary leader Azam Nazeer Tarar said the federal minister should be “ashamed” at the language used by him and deplored that the ruling alliance instead of apologising was proud of this behaviour.

The noisy protest continued when Leader of the House Shahzad Waseem took the floor.

“If the opposition continues like this, it will be difficult for me to control my members,” he remarked, asking the opposition members to look at their behaviour in the house rather than talk about remarks made in political rallies.

He said a debate would continue in this country on the 1971 incidents, asking whether it was not true that Bhutto had said he would break the legs of those who visited the then East Pakistan.

PTI’s Faisal Javed declared Prime Minister Imran Khan “a true patriot”, saying that Mr Khan was neither running a business nor had made Avenfield apartments and Surrey Mansion.

PTI’s Ijaz Chaudhry recalled the formation of Pakistan National Alliance in 1970s against the “worst kind of civilian dictatorship” under late Bhutto.

He also accused the late prime minister of victimising his opponents and criticised him for holding ministerial portfolio for eight years in the cabinet of the first military dictator Gen Ayub Khan.

In the lower house of the parliament, Shamim Ara Panhwar of the PPP raised the issue while speaking on a point of order.

She asked the minister to take his words back and tender an apology on the floor of the house.

Later, Syed Naveed Qamar and Yousuf Talpur of the PPP also condemned the minister’s remarks, saying that “historic figures” should not be maligned.

PML-N’s Murtaza Javed Abbasi slammed the ministers for using “filthy language” during the AJK election campaign and warned that if they would call Nawaz Sharif and Maryam Nawaz robbers, then they would also call Imran Khan, Atta Chor and Cheeni Chor.

PTI MNA Ali Nawaz Awan alleged that the opposition leaders in their speeches in AJK were also using foul language against the prime minister, saying that “it is a two-way traffic”.

He said it was late Bhutto who had wrongly agreed that Kashmir was a bilateral issue between India and Pakistan.

Later, the PPP and the PML-N members staged a walkout and Mr Talpur pointed out lack of quorum. Deputy Speaker Qasim Suri first suspended the proceedings till completion of quorum and later adjourned the sitting till Friday morning when the government failed to ensure the presence of minimum of 86 members required to be present for maintaining quorum.

The assembly could not take up even a single item on the agenda.