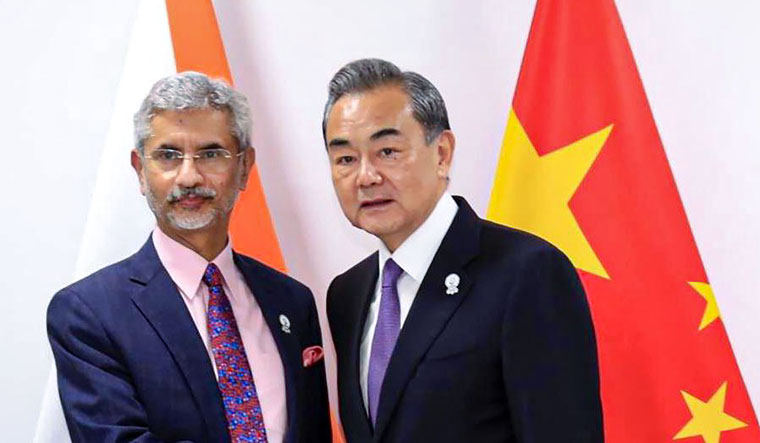 All eyes are on a meeting scheduled between External Affairs Minister S. Jaishankar with his Chinese counterpart Wang Yi on Wednesday. This will be the second face-to-face talk between the two leaders since the military standoff in May 2020 in eastern Ladakh on the Line of Actual Control (LAC).

Jaishankar and Wang Yi are expected to meet on the sidelines of the Shanghai Cooperation Organisation (SCO) Council of Foreign Ministers meet in Tajikistan. The two leaders had met in September last year in Moscow, which led to a five-point roadmap for resolving the standoff on the LAC, which is yet to be fully implemented.

Unresolved issues of military disengagement on multiple friction points in eastern Ladakh are likely to be the core of their meeting. In February, as an outcome of the military commanders’ meeting, both sides agreed to de-militarise areas around both banks of Pangong Tso. But since then, there is no forward movement on disengagement on other friction points in eastern Ladakh, where both sides have amassed huge number of men and machines.

While the Indian Army has maintained that the situation on the ground (LAC) continues to be as ‘hithertofore’, the activities of the People’s Liberation Army (PLA), including turnover of troops, continue to be monitored by the Indian Army.

Fresh satellite images have indicated PLA’s renewed focus towards McMahon Line on Arunachal Pradesh and Sikkim. Besides Ladakh, China is making permanent structures for its troops along the LAC.

“Multiple intelligence inputs indicate PLA’s infrastructure development on areas like Sikkim and Kemang sector (Tawang) with diversions at Nakula and Fish tails. Fish Tail-1 and Fish Tail-2 are in the easternmost corners of Arunachal Pradesh and close to McMahon Line. We need to be more careful in these areas in the near future,” said a key defence official. He added that China may take advantage of the anticipated third wave of COVID. In last couple of months, movement of Chinese troops across Arunachal Pradesh has increased manifold. It has not only created military huts for its soldiers, but also created structures for habitation.

A few months back, Eastern Arunachal MP Tapir Gao had claimed that China had built a 100-house village deep inside Arunachal Pradesh.

Moreover, China has major interests in Arunachal Pradesh due to the state’s affiliation with the Tibetan spiritual leader Dalai Lama.

In a message to China (for its provocative behaviour in Ladakh), on July 6, in a departure from the past, Prime Minister Narendra Modi had called the Dalai Lama on his 86th birthday. Keeping in mind the sensitivities of the Chinese government, New Delhi had been very careful and calibrated in its engagement with the Dalai Lama. This is the first time since 2015 PM Modi publicly acknowledged his telephonic conversation with the Tibetan spiritual leader. In September 2015, PM Modi had thanked the Dalai Lama for his birthday greetings to Modi.

China does not accept the Dalai Lama’s government-in-exile in India and disapproves of any engagement with him. When local residents in Demchok, Ladakh, were celebrating the Dalai Lama’s birthday last week, Chinese, comprising Army personnel and civilians, came in five vehicles and raised banners near the village community centre in Indian territory.

“Chinese military has not shown any signs of accepting status quo ante April 2020, which we have been insisting. Instead, it (PLA) continues to strengthen its position by deployment of additional military assets including improved efficiency of its air operations,” said a senior official, while adding China has deployed S-400 air defence missile systems on its border with India. The Indian Air Force deployed its frontline fighters including newly inducted Rafale jets from France in the Ladakh sector. And the Indian military believes swift deployment of Indian Air Force strike assets have somehow deterred the aggressive Chinese military. Newly inducted Chinook and Apache helicopters along with omni-role Rafale jets changed the dynamics on the icy heights of Himalayan frontiers, as these air assets were for the first time deployed in extreme-high-altitude areas.

Friction areas like Hot Springs, Gogra and the 900 sq km Depsang plains and Charding Ninglung Nallah track junction at Demchok and Patrolling Point 15 are yet to be resolved. And, out of the four principal issues, Depsang could prove to be most contentious, which China is not willing to discuss at talks between senior military officials. Since 2013, China has blocked Indian patrols to Patrolling Points 10, 11, 11A, 12 and 13 in Depsang plains.

Due to the Chinese military’s adamant behaviour, both sides have not been able to fix the date for the next round of corps commander-level talks, which will be the 12th round of military talks since last year’s standoff.