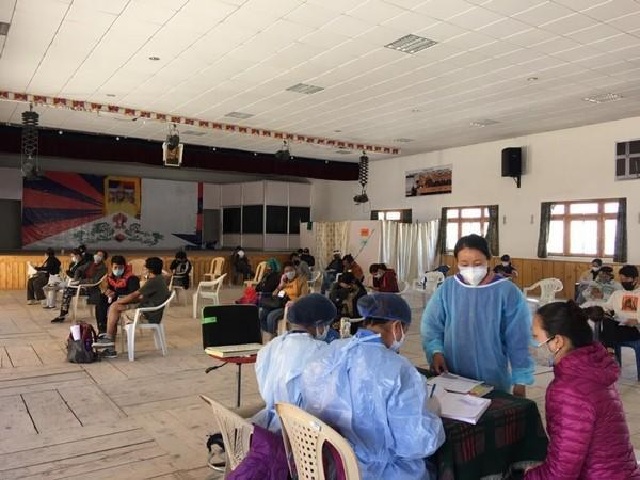 Ladakh has become the first Union Territory of India to vaccinate all the residents as well as the ‘guest population’, consisting of hotel workers, migrant labourers, and Nepalese citizens who have been earning their livelihood in the UT, with the first dose of COVID-19 vaccine.

According to the administration officials, in spite of the low population in Ladakh, there is no mean feat in view of the region’s challenging terrain, extreme weather, and isolated centres- many of which are extremely difficult to access.

They further added that the Central Government also ensured a steady and more than adequate supply of vaccines which helped in boosting the confidence of the health workers as well as to pace up the speed of vaccination in spite of the difficulties.

Lt. Governor @R_K_Mathur lauded the efforts of the entire medical fraternity of #Ladakh for successfully inoculating the entire 18+ population residing in Ladakh, making the Union Territory 1st in the country to achieve this target.@PBLadakh @padmaangmo @ladags pic.twitter.com/eCvR60deNa

•  As per the official data, a total of 89,404 citizens from all the eligible age groups, including 18-44 years, have been administered the first dose of vaccine.

•  This was done in less than 3 months of starting the 3rd phase of COVID-19 vaccination.

•  A total of 6,821 Nepalese citizens living in Ladakh were also among those who have been vaccinated.

A senior district official informed that the priority was given to the hotel workers, most of whom are from outside Union Territory, and public transport/taxi drivers as they are in the frontline of the tourism industry.

Labourers and handymen who came in from other states to Ladakh during summer were also treated on priority.

A large number of functioning primary health workers and health centers experience in mass vaccination programmes such as against Polio also helped in speeding up the COVID-10 vaccination.

According to an official, Coronavirus vaccination was nothing new for the grassroot health workers as they were already experienced from the Polio drives. COVIDF vaccination was just another programme to be implemented.

Ladakh administration had already started vaccinating the 18-44 years age group before it was formally sanctioned by the Central Government.

According to an official, the administration ended up with surplus COVID-19 vaccines. So instead of wasting them, the health workers started vaccinating once the Center decided to principle to vaccinate the people of this age group.