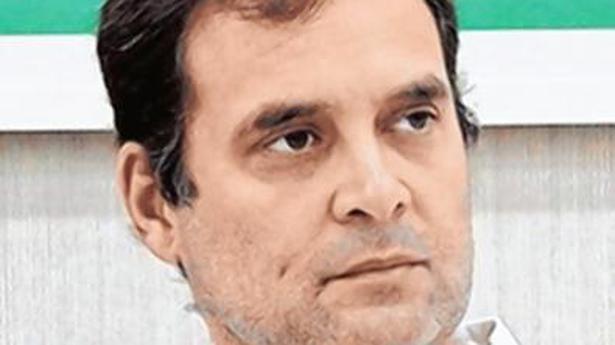 Former Congress president Rahul Gandhi pressed the Standing Committee on Defence to discuss the India-China stand-off at a meeting held on Wednesday, even as the committee has called off a tour of Pangong Lake in Ladakh which is the flashpoint of the Indo-China conflict.

The committee had met on the agenda of ‘Review of Working of Cantonment Boards’. This was its third meeting on the subject.

The committee is headed by BJP leader Jual Oram. Instead of touring the Pangong Lake, the committee has now proposed a tour of Army cantonments in Bhubaneshwar and Sikandra for the members.

According to sources, at the fag end of the meeting, Mr. Gandhi said that while the issue of Cantonment Boards is important, there are many other significant issues that too need the attention of the committee. “The situation in Ladakh, he pointed out, has not improved in more than a year now. The U.S. army’s exit and Taliban’s takeover in Afghanistan also pose a serious security threat for the country. He said that the committee on Defence should discuss the security preparedness of the country,” one of the members said.

The BJP MPs did not protest at Mr. Gandhi’s suggestion. The subject “Review of Working of Cantonment Boards,” committee chairperson Mr. Oram said, was selected unanimously during the meeting on subject selection for the year.

At this, sources said the BSP’s Lok Sabha MP Kunwar Danish Ali suggested a way out. “He said that may be a sub-committee can be formed which can have in-depth investigation on the subject, giving ample time to the committee to discuss issues like the Indo-China conflict,” another member said.

A few committee members also suggested that the committee meet again on Thursday specifically to discuss the Chinese incursions in Ladakh.

Mr. Oram though, sources said, declined to hold such a meeting.