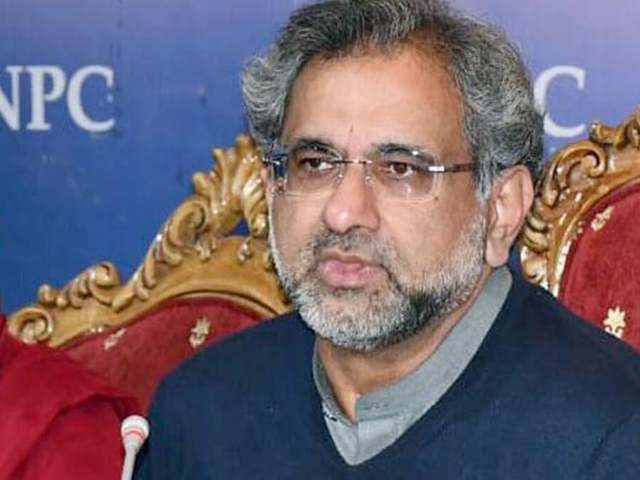 ISLAMABAD: Former prime minister Shahid Khaqan Abbasi has said that there is no provision in the law regarding extension in the tenure of the National Accountability Bureau (NAB) chairman. Talking to reporters after appearing before Accountability Court in Liquefied Natural Gas (LNG) case, he said that if extension was granted to chairman NAB then the intention of the government would become clear.

Abbasi said that the present chairman NAB was appointed during Pakistan Muslim League-Nawaz’s term but no one else has done as much damage to the country, as this person. To a question about the Supreme Judicial Council (SJC)’s decision to proceed against the NAB chairman over misconduct complaint, he said that this is also a flaw in the system that a two years old case is going to be taken up.

“We have earlier said that we have nothing to do with it,” he said.

He said that if any case has to be made against the chairman NAB then a case should have been made against him that he used NAB for politics.

“Today NAB has become an institution to hide crimes and scandals of the government,” he said.

About his case, he said that the Islamabad High Court (IHC) has clarified the position of the case made against him, in which the NAB has implicated his other 13 family members and friends.

“If the NAB chairman and officers have knowledge about the law and read the detailed IHC’s judgement of bail plea then fact about the case will become clear to them,” he said.

“There is no allegation of financial gain or corruption then what is the case,” he asked, adding that today, the government officials were also being implicated in these cases.

Abbasi said that there is no accountability in the country and it is just an effort to take revenge from the opposition leadership. He said the accountability system of the court did not fulfil basic requirement of justice.

He said that the election in Azad Jammu and Kashmir (AJK) is a test case and the whole world was watching the AJ&K elections.

“If the AJK elections are also rigged, how will the world see Pakistan,” he said.

Earlier, he appeared before Accountability Court-II Judge Muhammad Azam Khan in the LNG case against him and others but the court adjourned the case till July 27 without any proceedings due to lawyers’ protest.