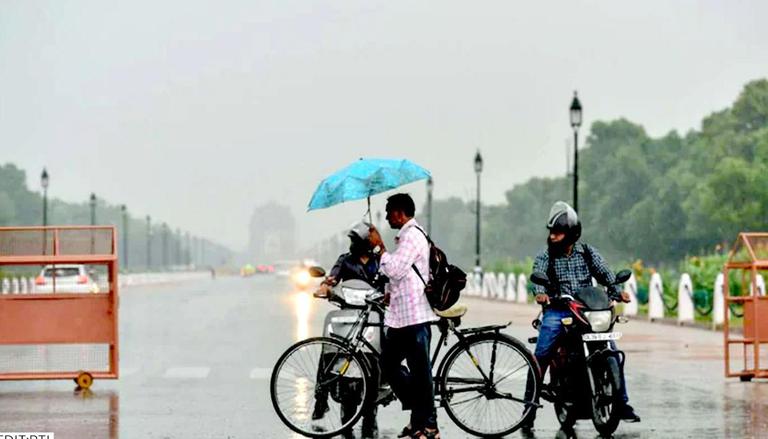 The India Meteorological Department (IMD) on Tuesday predicted thunderstorms with light to moderate intensity rain over parts of Delhi and its adjoining areas. “Thunderstorm with light to moderate intensity rain and winds with speed of 20-40 Km per hour would occur over and adjoining areas of few places of South-West Delhi, South Delhi, NCR during next 2 hours,” the IMD tweeted. The senior scientist at IMD also clarified that predictions are not 100 per cent accurate, and the Meteorological Department is monitoring the conditions. He said that IMD will study why the arrival of rainfall was delayed in Delhi despite favourable conditions.

Earlier today, the department said that monsoon conditions continued to remain favourable for Delhi and that it was monitoring the situation. The department had predicted rain in the national capital from 10the July but the monsoon defied the prediction and the national capital did not see any rain. Speaking to news agency ANI, IMD’s senior scientist K Jenamani said that the monsoon has covered most parts of Rajasthan and some parts of Punjab. “For Delhi, conditions continue to remain favourable and we’re monitoring the situation. Monsoon is active in Peninsular India, parts of North India, including Uttarakhand and Himachal Pradesh,” he added.

Earlier in the day, the weather department had predicted light rain in the city. Rain was predicted on Sunday but the long-delayed monsoon missed yet another date. Today, Delhi woke up to a humid morning with the minimum temperature settling at 27 degrees Celsius, while the maximum temperature is expected to settle around 37 degrees Celsius. “Conditions were favourable for further advance of Southwest Monsoon over Delhi, remaining parts of west Uttar Pradesh, some more parts of Punjab, Haryana and Rajasthan today,” the department said.

The relative humidity was recorded at 74 per cent at 8.30 am. On Sunday, MD scientist Sunitha Devi informed that the arrival of the monsoon would be announced in Monday’s midday bulletin based on observations at 8.30 am on July 12. The monsoon onset is declared based on the rainfall reported during the past 24 hours ending at 8.30 am. On Saturday, the IMD had predicted widespread rainfall over Northwest India during the next 5 days. It also predicted isolated heavy rainfall over Jammu, Kashmir, Ladakh, Himachal Pradesh, Uttarakhand during 10th-13th July; over Punjab during 10th-13th July; over Haryana, Chandigarh, Delhi and West Uttar Pradesh during 11th-13th July; over East Rajasthan during 10th-12th July.