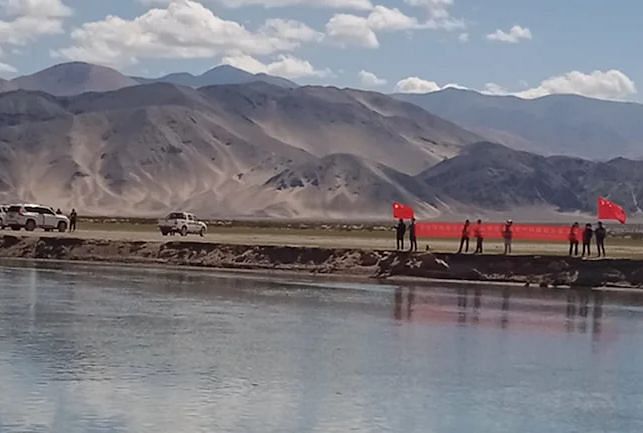 On 6 July, Chinese soldiers displayed banners and Chinese flags in protest when Indian villagers in Ladakh’s Demchok area were celebrating the birthday of the Dalai Lama, the spiritual head of Tibetan Buddhism.

The Chinese drove in five vehicles down unpaved roads to a point across the Indus River near Koyul (or Kakjung), which is one of the last settlements in the Demchok sector in south-eastern Ladakh.

Konchok Stanzin, the Councillor of Chushul, has posted a video of the incident on Twitter, in which the Chinese can be seen displaying red banners and Chinese flags with their vehicles in the background.

A similar incident was reported in the same area of Ladakh only a few days back when the Chinese showed protest banners and flags to the locals who were setting up a solar pump.

In July 2019, when Indian villagers were celebrating the Dalai Lama’s birthday, the Chinese protested in the same manner. Chinese in civilian clothing had raised banners, which read, “Ban all activity to split Tibet”, from across the Indus River.

In this area, the Line of Actual Control runs along the Indus River.

The development on 6 July this year came after Prime Minister Narendra Modi wished the Dalai Lama on his birthday, reports said. In a departure from the past, Modi publicly acknowledged the interaction.