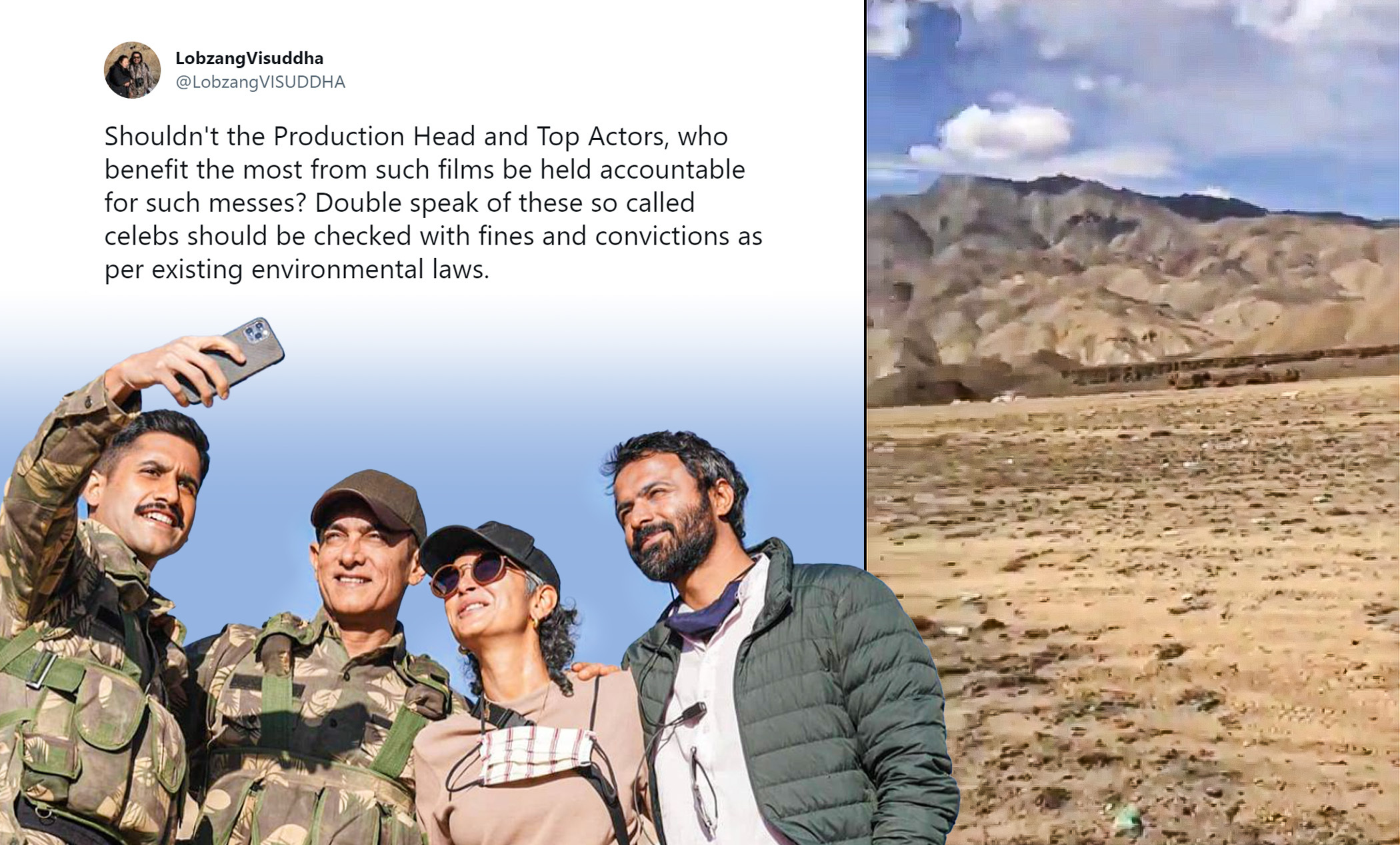 Aamir Khan’s Laal Singh Chaddha also starring Kareena Kapoor Khan has been garnering headlines and buzz since the very beginning. Be it the fact that it is a Bollywood remake of the classic and fan-favorite Forrest Gump or the first look tease of Khan that reminded us all of the even loved Tom Hanks, the film has easily been one of the most anticipated films of all times. Even with the Coronavirus pandemic playing a spoilsport and delaying the watch. Fans can’t wait for Aamir Khan to recreate his magic and do what he does best – leave a lasting impression with a memorable performance.

Having said that, the film now is in news and for the wrong reasons. According to Twitter user Jigmat Ladakhi, Khan and team Laal Singh Chaddha have littered and left behind Wakha village in a bad state. Sharing a video claiming that the ‘Dangal’ actor and crew has allegedly polluted the place where they are shooting action scenes for the upcoming remake, he also wrote, “This is the gift Bollywood star Amir Khan’s upcoming movie Lal Singh Chada has left for the villagers of Wakha in Ladakh. Amir Khan himself talks big about environmental cleanliness at Satyamev Jayate but this is what happens when it comes to himself.” See the video here.

He also added, “This is the kind of havoc the crew is creating with the undisturbed environment. Wake up so called Bollywood stars!! Seems these people lost their civic senses(sic)!!”

Needless to say, Twitter is calling out the actor and the production house, expecting authorities to do the needful. While many called for imposing a fine/ban, others are calling Khan a hypocrite.

This litter should be collected and send back to @amirkhanmma by courier https://t.co/b0A2YR058l

If hypocrisy had a limit for people like AAMIR KHAN https://t.co/E2EyubOkvc

See this @ParamountPics @ParamountMovies @paramountplus @ParamountNetPR @paramountnet this is what the cast and crew of your in production Indian film “Laal Singh Chaddha” doing to the environment https://t.co/VOA40KtHeA

.@ParamountPics is producing this funny remake of #ForrestGump in India where they are going to shit on the film.
But what is more alarming is that the cast & crew are polluting the beautiful valley of Ladakh. @ParamountMovies @THR@DEADLINE @TMZ @enews @eentertainment https://t.co/Aeu0KKlQ54

Shouldn’t the Production Head and Top Actors, who benefit the most from such films be held accountable for such messes? Double speak of these so called celebs should be checked with fines and convictions as per existing environmental laws. https://t.co/BwRUubzLkA

While it is not clear if the production house has taken any responsibility or refuted the claims yet, the video does demand quick and timely action. This isn’t the first time when a film set is under fire for littering and unfortunately, it won’t be the last if things go unnoticed.

Meanwhile, the film also stars Mona Singh and Naga Chaitanya and even has cameos by Shah Rukh Khan and Salman Khan. It is directed by Advait Chandan who recently posed with Khan, Chaitanya and Kiran Rao in a picture from the sets where the shooting is currently underway. Laal Singh Chaddha is reportedly headed for a Christmas 2021 release.