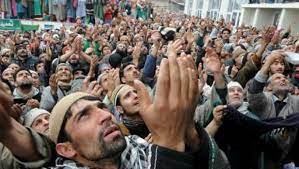 Every year, Kashmir Martyrs’ Day (Youme Shudaha-e-Kashmir) is commemorated on July 13 in the memory of 21 Kashmiris who were martyred outside Srinagar Central Jail by the troops of Dogra Maharaja on July 13, 1931. This very day is observed on both sides of the Line of Control and all over the world by the Kashmiris, including their Pakistani brethren to pay homage to these Kashmiris. This time, All Parties Hurriyat Conference has appealed to the people of the Indian Illegally Occupied Jammu and Kashmir (IIOJK) and the freedom-loving Kashmiris, living in Azad Jammu and Kashmir, Pakistan and other parts of the world to observe Martyrs’ week from July 6 to 13, this year. Tehreek-e-Kashmir Europe has also organized Martyrs’ week.

In fact, the history of Dogra rule (1846-1947) in Kashmir is replete with tyrannous treatment, meted out to the Kashmiri Muslims by Dogra forces. Under the Dogra rule, they were leading so miserable life that it was difficult to differentiate them from beasts. Slave labour, heavy taxes, capital punishment for cow slaughter, and living under constant terror was order of the day.

On April 19, 1931, the ban of Eid Khutba (Sermon) ignited widespread demonstrations in the Jummu city for a number of days. It was followed by desecration of the Holy Quran at the hands of Dogra forces, which resulted into outrage among the Muslims throughout the state. In Srinagar, people gathered in Jamia Masjid to denounce this blasphemy. One such get-together was held in Khankah-e-Muella Srinagar, which was addressed by prominent Kashmiris. When the meeting was concluded, a youth, Abdul Qadeer, pointing his finger to the Maharaja’s palace, raised slogans “destroy its every brick.” With the accusation of sedition, he was arrested forthwith. Abdul Qadir was to be tried in the court, but due to large public resentment, the court was shifted to Central Jail Srinagar.

On July 12, 1931, in response to the shifting of court, intense public protests were held throughout the city. The next day, on July 13, 1931, thousands of people thronged the Central Jail Srinagar to witness the in-camera trial of Abdul Qadeer. As the time for obligatory prayer approached, a young Kashmiri stood for Azan. The Dogra Governor, Ray Zada Tartilok Chand ordered soldiers to open fire at him. When he got martyred, another young man took his place and started Azan. He was also shot dead. In this way, 21 Kashmiris embraced martyrdom in their efforts to complete the Azan. The people carried the dead and paraded through the streets of Srinagar, chanting slogans against Dogra brutalities. Complete strike was observed in the city, which was followed by weeklong mourning. This incident shook the whole state and the traffic from Srinagar to Rawalpindi and Srinagar to Jammu came to halt from July 13 to 26, 1931. The 21 martyrs are buried in Martyrs’ Graveyard at Khawaja Bazar, Srinagar.

Consequent upon these brutal killings, the Kashmiri leadership realized the need to form a political party, Muslim Conference (MC) with a view to waging struggle for their freedom. Afterwards, on July 19, 1947, MC passed a resolution to merge Kashmir with Pakistan, considering the geographical proximity—majority of Muslim population (77%), language and cultural relations of Jammu and Kashmir.

During the partition of the Sub-continent, the people of the state of Jammu and Kashmir (J&K) which comprised Muslim majority decided to join Pakistan. But, Dogra Raja, Sir HariSingh, a Hindu who was ruling over the J&K in collusion with the Indian Prime Minister Jawaharlal Nehru and Governor General Lord Mountbatten joined India.

The Radcliffe Boundary Award gave the Gurdaspur District—a majority Muslim area to India to provide a land route to the Indian forces to move into the J&K.

In fact, the history of Dogra rule (1846-1947) in Kashmir is replete with tyrannous treatment, meted out to the Kashmiri Muslims by Dogra forces. Under the Dogra rule, they were leading so miserable life that it was difficult to differentiate them from beasts.

Indian forces invaded Srinagar on October, 27 1947 and forcibly occupied the J&K in utter violation of the partition plan.

When Pakistan responded militarily, on December 31, 1947, India made an appeal to the UN Security Council to intervene and a ceasefire ultimately came into effect on January 01, 1949, following UN resolutions calling for a plebiscite in Kashmir.

On February 5, 1964, India backed out of its commitment of holding plebiscite. Instead, Indian Parliament declared Kashmir-an integral part of the Indian union.

Since 1989, various forms of state terrorism have been part of a deliberate campaign by the Indian army and paramilitary forces against Muslim Kashmiris. It has been manifested in brutal tactics like crackdowns, curfews, illegal detentions, massacre, targeted killings, sieges, burning the houses, torture, disappearances, rape, breaking the legs, molestation of Muslim women and killing of persons through fake encounters.

Indian brutal actions against the Muslim Kashmiris reached climax on August 5, 2019 when Indian government led by the fanatic Indian Prime Minister Narendar Modi, the leader of the extremist party BJP, revoked articles 35A and 370 of the Constitution, which gave a special status to the disputed territory of the IIOJK. Indian government bifurcated Jammu and Kashmir into two union territories—Jammu and Kashmir and Ladakh to be ruled by the federal government.

Indian rulers have also issued over 1.8 million domicile certificates to non-Kashmiris to change the ethno-demographic structure of the IIOJK.

Now, more than 23 months have been passed. But, Indian strict military lockdown in the IIOJK continues. Despite the deployment of more than 900,000 military troops in the IIOJK, who have martyred thousands of the Kashmiris through brutal tactics-fake encounters, New Delhi has failed in suppressing the Kashmiris’ prolonged war of liberation.

Moreover, Indian forces had also accelerated shelling inside Pakistani side of Kashmir by violating the ceasefire agreement across the LoC and compelled Pakistan Army to give a matching reply. In the recent past, the Director Generals of Military Operations of Pakistan and India had agreed to strictly observe the 2003 ceasefire agreement at the LoC. But, unless resolved, Kashmir will remain a nuclear flashpoint.

Nonetheless, observing the Youme Shuhada-e-Kashmir on July 13 all over the world, Kashmiris renew their pledge to continue the ongoing war of liberation for the accomplishment of their legitimate right of self-determination as recognized by the related resolutions of the UNO, and for the independence of Kashmir from the despotic Indian rulers who continue state terrorism in the IOK like the Dogra rulers. In this respect, the Martyrs’ Day has given a new impetus to the Kashmiris’ endless struggle.