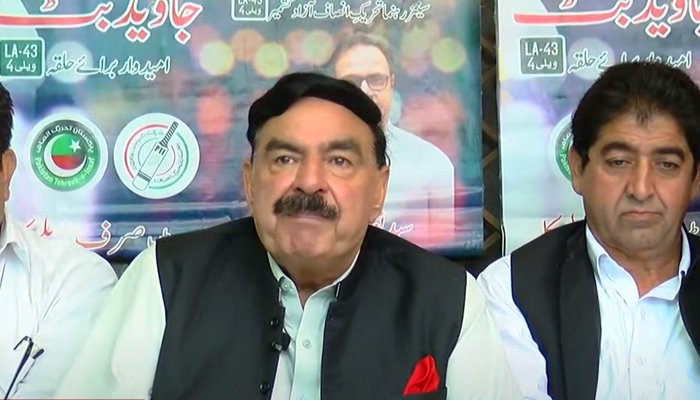 RAWALPINDI: Interior Minister Sheikh Rasheed Ahmed has said that Pakistan would accept whatever decision Afghanistan makes after the pullout of American troops, scorning Indian role in the Afghan soil which it has used to organize terrorism against Pakistan.

He said India has left no option but to run away from Afghanistan.

During a presser on Sunday, Interior Minister Rasheed said that Pakistan would agree to any decision taken by Afghanistan. He said that Afghanistan had been fighting for half of the century.

“Now new and suave Taliban have emerged. These Taliban do not sort things through a gun barrel,” he said and added that it was vital for the whole region to settle affairs with the Taliban through dialogue.

The interior minister stated that it was Islamabad’s desire that there would be peace in Afghanistan. He hoped that Afghanistan President Ashraf Ghani, Abdullah Abdullah, former president Hamid Karzai and Mullah Baradar became one.

He maintained that Pakistan stood with the rest of the world on the issue of peace in Afghanistan. He categorically denied providing military/airbases to any country against Afghanistan. He said Prime Minister Imran Khan’s decision not to give bases was resolute. He said the Pakistani nation also wanted that we would not become a tool in this matter. He denied any pressure on Pakistan in this regard.

Interior Minister Rasheed stated that no superpower in the world could condone Pakistan. He opined that the government and Pakistan Army together would pave way for the restoration of peace in Afghanistan.

On stranded people in Afghanistan, Rasheed said that vaccinated people would be allowed to cross into Pakistan through the Torkham border. He said that Chaman and Torkham borders would remain open and FIA had been directed in this regard.

On the forthcoming Azad Jammu and Kashmir general elections, the interior minister predicted that Imran Khan was going to form government in the AJK on July 25. He added that PM Khan would highlight the Kashmir issue in the world.

On Maryam Nawaz’s election campaign in Azad Jammu and Kashmir, he objected to the language she was using terming it irresponsible.

On Bilawal Bhutto Zardari’s electioneering in AJK, he remarked he was holding the CV of Mr Bilawal as the Bhutto scion was dear to him.

He was of the view that the day when the losing party conceded to its defeat that day the democracy would be strengthened. He said only the ‘Bat’ symbol would get maximum votes in the elections.

Rasheed said that the whole world knew how many bank accounts, the opposition had opened.

He maintained that all political parties were agreed with the Army during its briefing in the National Security Committee meeting a few days ago.