The ‘pressure fuse’ used in the bombs that were dropped on the Indian Air Force station in Jammu through drones in a first-of-its-kind attack indicates that some elements of the Pakistan army or the Inter-Services Intelligent helped terror group Lashkar-e-Tayiba in fabricating the improvised explosive devices (IEDs), according to security sources. 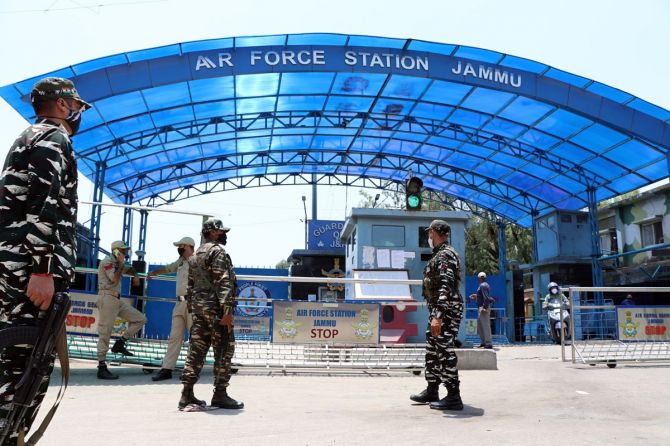 The IED that pierced the rooftop of one of the IAF buildings at the Jammu airport carried less than one kg of RDX and a cocktail of other chemicals whereas the one that was dropped on the ground contained a little over one kg of the deadly explosives along with some ball bearings, they said.

The sources said the IED used in the June 27 attack on the IAF station ‘definitely’ used the technical expertise of the Pakistani military.

The ‘pressure fuse’ used is similar to the ones used by the Pakistani army.

A ‘pressure fuse’ is generally used in minefields, anti-tank mines and those dropped by the air force in the fuselage between the explosive and main detonator of a shell or an IED.

The explosive devices are activated by the pressure of either falling on the ground with force or some individual or vehicle passing over it.

However, in these sophisticated IEDs, the ‘pressure fuse’ had been deployed at the nose of the bombs so that they trigger with a force after falling on the ground, the sources said.

Most of the artillery shells and mortar bombs have this type of fuse and that’s why they don’t explode in the air but on impact, they explained.

Director General of Jammu and Kashmir Police Dilbag Singh had said earlier that Pakistan-based terrorists of LeT were suspected to be behind the bombing of the IAF station in Jammu through drones, which may have come from across the border.

The National Investigation Agency took over the investigation into what was the first instance of Pakistan-based terrorists deploying drones to strike vital installations in India on June 29.

Two IAF personnel were injured in the explosions that took place within six minutes of each other.

The first blast ripped off the roof of a single-storey building at the technical area of the airport manned by the IAF in Satwari on the outskirts of Jammu.

The second one was on the ground.

It is mentionable that Pakistan has been procuring armed drones from China and Turkey of late.

The sources said drones can fly up to three hours and can be monitored and manoeuvred remotely through Global Positioning System technology.

In September last year, five Lok Sabha members from the Yuvajana Shramika Rythu Congress, in a written question, had asked whether the government had issued any guidelines in the light of the possibility of drones being used as weapons of attack on high-security installations.

The then Minister of State for Home G K Reddy had stated, “In order to counter the threat of drones in the country, necessary guidelines have been issued, which include measures to be taken by the central and the state governments in consultation with the security agencies.”

In a written reply, the then Minister of State for Civil Aviation Minister Hardeep Singh Puri had said the government had issued a standard operating procedure to prevent drone attacks on vital installations.