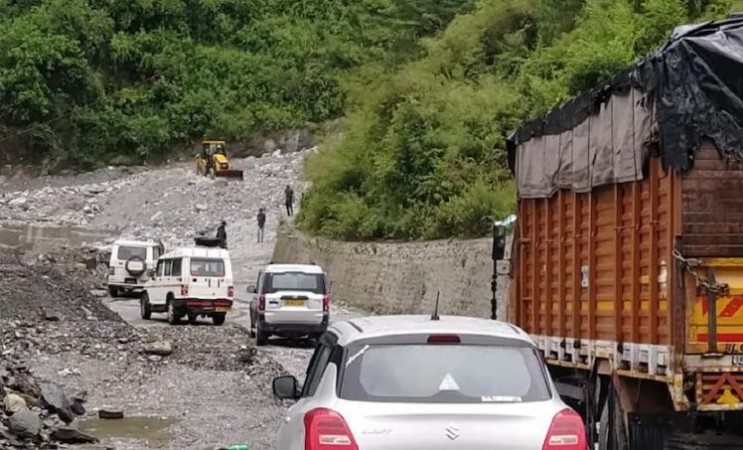 Dehradun: Heavy rains have affected public life in Uttarakhand. After a long gap, landslides have started in the mountains due to rain once again. Badrinath NH-58 was closed at three places on Sunday morning due to landslides. Moreover, the road has been disrupted due to heavy debris in the mad drain.

There is a long queue of vehicles here. Badrinath Dham has also been receiving continuous rainfall since yesterday due to which the water level of Alaknanda in Badrinath Dham is once again rising. In Chamoli, highways have been closed at several places following debris near Pagalnala, Gulabkoti, and Hanumanchatti due to rain which has led to long jams. People are facing difficulty in commuting due to jams.

State that due to the pressure area in the Bay of Bengal and the monsoon moving forward, widespread rainfall was expected in northwest India after 10th July. Heavy rain has also been predicted in Jammu, Kashmir, Ladakh, Gilgit-Baltistan, Muzaffarabad, and Punjab on 11th and 12th July. Heavy rainfall has been predicted in Uttarakhand and western Uttar Pradesh between 9th July and 14th July. In Uttarakhand, heavy to very heavy rain is expected on 11th and 12th July. An orange alert has been issued for the same.

India in a better position to deal with the third wave: NITI Aayog