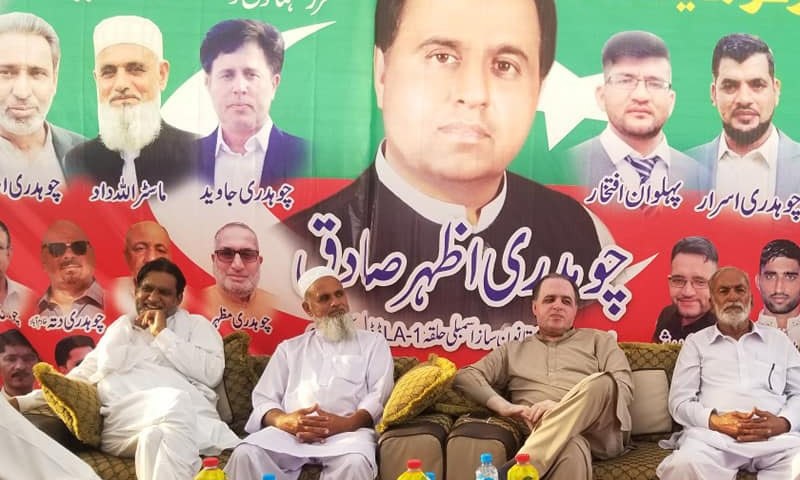 MUZAFFARABAD: A Pakistan Tehreek-i-Insaf (PTI) candidate in Mirpur district of Azad Jammu and Kashmir (AJK) on Friday gave an undertaking to the Returning Officer (RO) concerned regarding observance of the code of conduct for the upcoming polls after a video clip — showing federal Minister for Kashmir Affairs Ali Ameen Gandapur giving an unspecified sum of money to a PTI activist for repair of a link road — created uproar on social media.

On July 4, Mr Gandapur and his cabinet colleague Murad Saeed visited Ganhair village on the outskirts of Dadyal in LA-1, Mirpur-I, where he gave money to one Chaudhry Rasib, a PTI activist, for repair of the most dilapidated portions of a road after he was told that a raging torrent in the area would claim many lives in each monsoon because of the absence of a culvert. Chaudhry Azhar Sadiq, PTI’s candidate for the constituency, was present on the occasion.

“I am giving you money to improve at least four to five most dilapidated patches of the [link] road as a makeshift arrangement… Allah willing, when I drive through this road next time we will cross (the torrent) through a culvert,” the minister was heard as saying in the video clip.

Government functionaries barred from visiting the constituency without prior intimation

As the clip went viral on social media and drew a lot of criticism from the rival parties, the ruling Pakistan Muslim League-Nawaz (PML-N) lodged a complaint with RO Raja Shamraiz for action against Mr Sadiq and the minister.

In a show-cause notice served on Mr Sadiq, the RO referred to the clip and said the minister’s act “at his (Mr Sadiq’s) behest and in his presence, prima facie amounted to violation of the code of conduct which carried punishment of imprisonment/fine and could also render him disqualified to contest elections”.

However, both Mr Sadiq and Mr Rasib appeared before the RO and pleaded not guilty in their statements.

Mr Rasib informed the RO that the minister had visited Ganhair on his request because he wanted his help for repair of the rundown link road. Continuing, he said the minister had given him just Rs390,000 and Mr Sadiq had nothing to do with it.

Mr Shamraiz told Dawn that Mr Rasib deposited the said amount with him and a final decision about the money would be made by the Election Commission, to which he had submitted a detailed report.

According to Mr Shamraiz, since the rival PML-N could not establish involvement of Mr Sadiq, he was given a warning on Friday to ensure observance of the code of conduct in future.

The RO said he had also ruled that from now onwards no federal government functionary would visit the constituency without prior intimation to the administration and his (RO’s) office. This correspondent made several attempts to get Mr Gandapur’s version on the incidents reported, but to no avail.

Mujeeb Khokhar, deputy director for media in his ministry, said he was not in a position to make any comment on the issue because he had been unable to reach the minister.