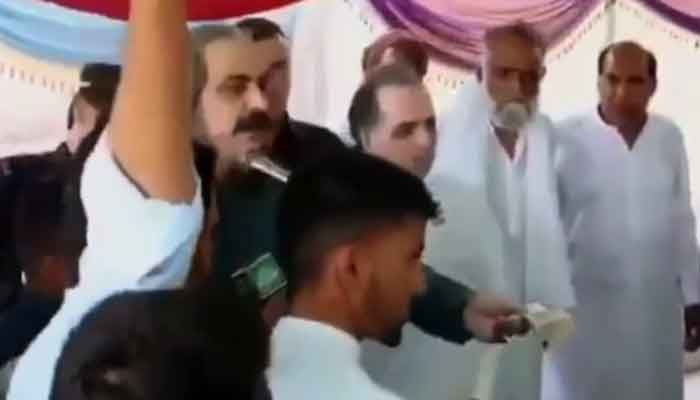 The Azad Jammu and Kashmir Chief Election Commissioner, retired Justice Abdul Rashid Sulehria, has written a letter to Prime Minister Imran Khan requesting him to ensure that ministers observe the code of conduct set for the July 25 elections to the AJK Legislative Assembly.

The development comes after a video began circulating on social media which shows Federal Minister for Kashmir Affairs and Gilgit Baltistan Ali Amin Gandapur handing over a thick bundle of cash to some supporters in AJK’s LA-1 Mirpur 1 constituency where he had gone to campaign this week.

Some people had gathered around Gandapur to complain to him of a badly damaged road. They told him that they are looking to repair it with whatever meagre funds they can scrounge up on their own. At this, the minister immediately handed them a donation of Rs500,000, which was recorded on video.

Gandapur also said that he is ready to provide further financial assistance and promised the people that the next time he visits the area, the road would have been repaired.

There were also reports of other ministers making promises of various schemes in other constituencies during their respective campaigns.

After this came to light, the chief election commissioner wrote to the prime minister, requesting him to issue directives in writing to the federal government ministers who are participating in the election, as well as to the provincial government, to ensure that no individual violates the code of conduct specified by the AJK government.

“It is important to mention that violation of any provision of Code of Conduct by any person during election campaign of a candidate may end up [in] disqualification of the candidate concerned,” the letter states.

Sulehria also wrote a separate letter to the premier to apprise him of the code of conduct itself.

“Let me take this opportunity to appraise your good self that AJK Election Commission has promulgated a Code of Conduct 2021 for strict observance by all political parties, candidates and polling staff who are deputed for administration of election process in order to ensure that elections are conducted fairly, justly and in most transparent manner in all respects without causing any intimidation or coercion upon the free exercise of right of franchise by the electors,” the letter begins by saying.

Sulehria said that the request is made “to ensure that the AJK General Elections […] be conducted in a transparent and independent manner without causing any blame for the misuse of state resources by holders of public office”.