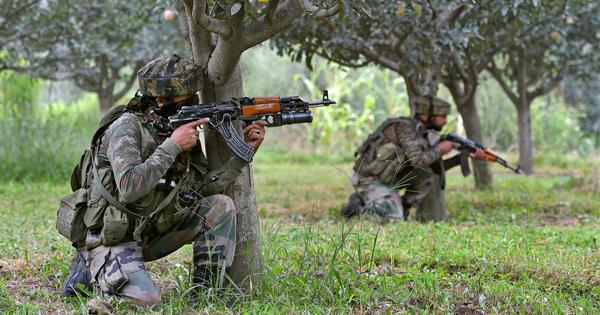 Five militants were killed over 24 hours in Pulwama and Kulgam districts of Jammu and Kashmir, Inspector General of Police of the Kashmir zone Vijay Kumar said on Thursday morning.

Four of the five militants were killed in two separate gunfights with security forces. The details of where the fifth militant was killed are not known yet.

One of the gunbattles took place in Zodar area of Kulgam district after the militants opened fire on security forces, who retaliated. The police said that the two killed during the operation in Kulgam district were affiliated to the Lashkar-e-Taiba militant group.

Details of the operation in Pulwama district are awaited. Two militants were killed in the gunfire, but their affiliation has not been revealed yet.

Meanwhile, on Wednesday, the Army said it had killed a suspected militant in the Nowshera sector of Rajouri district as it foiled an infiltration attempt, Greater Kashmir reported. Two soldiers were wounded in the operation, the Army said.

“Alert Army troops thwarted the infiltration bid by suitably employing an integrated surveillance grid alongwith domination by fire and engaging the militants in a fierce firefight in which one militant was neutralised,” said the Indian Army’s Public Relations Officer Lieutenant Colonel Devandar Anand.

An AK 47 rifle, four magazines of AK 47 with ammunition and two hand grenades were found from the deceased militant, according to the Army. The area was cordoned off and a search operation was launched.