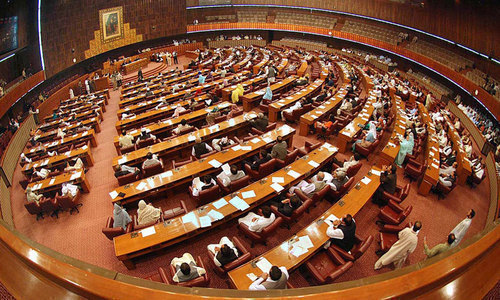 ISLAMABAD: The opposition Pakistan Muslim League-Nawaz (PML-N) lawmakers on the opening day of the new session of the National Assembly on Thursday raised the issue of ongoing protests by intermediate students in various parts of the country against the government’s decision to take their examinations on a short notice and asked the government to delay the examinations to provide more time to them for preparation.

But the government immediately rejected the opposition’s proposal, saying it was not possible as exams were about to commence in a day or two and that students in Balochistan had already appeared in examinations whereas in Sindh the exams were about to be over.

Moreover, Parliamentary Secretary for Higher Education and Professional Training Wajiha Qamar, who was responding to the calling-attention notice of the PML-N members on the subject in the absence of the minister, said the students had got sufficient time for exam preparations and they had been further facilitated by respective boards through reduction in syllabus and the number of subjects.

Upon constant and forceful insistence by the PML-N members, Speaker Asad Qaiser finally made an intervention and said that he would himself take up the matter with federal Minister for Higher Education Shafqat Mehmood on Friday (today).

NA Speaker says he will take up matter with minister

He said he would try to talk to the minister through a conference call since the minister had been in Gilgit-Baltistan in connection with some official engagements and the matter was of urgent nature.

The speaker refused to give any ruling on the issue despite a demand by the PML-N members, but asked the parliamentary secretary to consult the opposition members and give a serious consideration to their proposal of delaying the exams for at least another 45 days.

The suggestion to delay the exams had been floated by PML-N MNA from Narowal Ahsan Iqbal, who said the students were mentally upset and perturbed over the government’s decision to take their exams without completing even the reduced syllabus.

Mr Iqbal said that he belonged to a rural area where the students did not have the internet facility for online classes. He was of the view that the government’s focus was only on the children living in big cities whereas a large number of students belonging to middle and lower middle classes lived in rural areas.

“Millions of youth are passing through pain. They are facing depression and committing suicides,” he said.

Mr Iqbal suggested that the examinations should be delayed for 45 days. During these days, he said, the students should be called to attend physical classes and effort should be made to complete the syllabus.

He also suggested that the weightage of the entrance test for admissions to medical and engineering colleges should be increased up to 85 per cent and 15pc weightage should be given to matriculation.

The PML-N leader said that since the matter was of urgent nature, the speaker should convene a meeting on the issue in his chamber on Friday (today).

“I appeal to you and beg before you, please give them [students] some time and do not take two examinations,” said another PML-N MNA Khawaja Saad Rafique in response to the parliamentary secretary’s reply that the students who did not want to appear in the exams in July would have the opportunity to appear in the supplementary exams to be held in the month of September or October.

“Arrange classes. There is no moral justification to take the exams without completing the syllabus,” said Mr Rafique.

Another PML-N’s MNA Dr Darshan suggested formation of a parliamentary committee under the speaker to take up the issue. He also asked the government to immediately release the students arrested during the recent protests.

Responding to the PML-N members’ points, Ms Qamar claimed that these handful protesting students could not be considered representatives of all students as a majority of them were willing to appear in the exams.

The parliamentary secretary said that the roll number slips had already been issued to the students. She said the decision to hold the exams had been taken by all the provincial ministers for education in consultation with the boards, the Higher Education Commission, universities and the National Command and Operation Centre (NCOC). She said that colleges and universities had agreed to delay their admission process to save the academic year of the students.

Speaking on a point of order, independent MNA from the erstwhile Federally Administered Tribal Areas Mohsin Dawar alleged that terrorists had once again become active in North Waziristan where target killings had become order of the day.

He asked the government to take immediate notice of the situation, warning that otherwise the whole country could face the menace of terrorism again.

Minister for Parliamentary Affairs Ali Muhammad Khan said Pakistan was expecting some disturbances after withdrawal of the US forces from Afghanistan, but national institutions and armed forces were ready to counter the situation.

The National Assembly session ended abruptly when Nasiba Channa of the Pakistan Peoples Party pointed out lack of quorum in the house. The speaker adjourned the sitting till Friday morning.