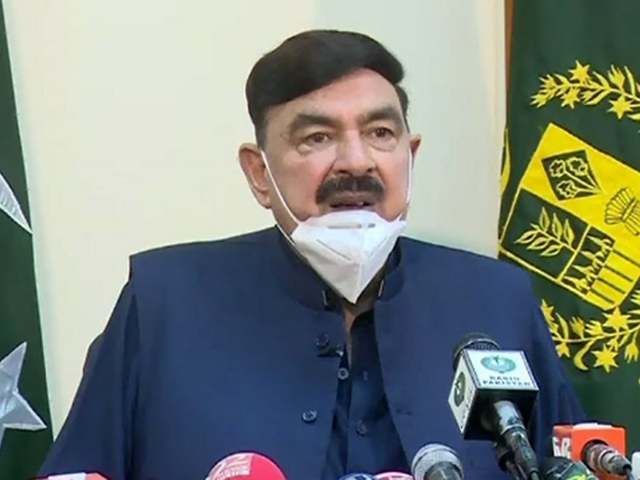 ISLAMABAD: The government has decided to start registration of all foreign nationals in the country, said Interior Minister Sheikh Rashid on Thursday.

Talking to reporters at the National Forensic Science Agency, he said that the Ministry of Interior has decided to start registration of foreigners whosoever may be.

“Efforts will be made to register every foreigner in the current developing situation,” he said.

Rashid said that the Ministry of Interior has also decided to allow foreigners to open bank account, start their business, getting mobile phone SIMs, and availing travelling facility through alien card.

He said that law enforcement agencies have also arrested some people who were found involved in making fake Afghan identity card.

Around 40,000 to 50,000 unidentified people had entered the country in the past 70 years, he said, adding that we do not know about their whereabouts.

The interior minister said that all visas had been converted online and with the permission of the cabinet, visas are issued within 30 days.

Agencies review the visa applications and if they failed to respond within 30 days, we issue the visas, he added.

Regarding border management, he said that entry at Chaman border will be linked to an electronic system from August 1st.

The National Command and Operation Centre (NCOC) has allowed entry of vaccinated people at Torkham border, he said, adding that cases of Covid-19 increased in Afghanistan and the government is planning repatriation of about 4,000 to 5,000 stranded Pakistanis at Torkham border, who got stranded there owing to suspension of flights to Saudi Arabia. He further said that after repatriation those who tested negative for Covid-19 will be allowed to go home, and those who tested positive, the NCOC and the Frontier Corps (FC) will make a decision about them.

About Azad Jammu and Kashmir (AJK) elections, he said that Prime Minister Imran Khan will soon visit Kashmir and he will accompany him on election campaign.

The Pakistan Tehreek-e-Insaf (PTI) will make government in the AJK, he said.

He said that there will be no dialogue with India until India takes back the decisions of August 5.

Pakistan strongly condemns what happened in Kashmir on the anniversary of Burhan Wani’s martyrdom, he said.

Responding to another question, he said that the report of a committee formed to hear appeal of Tehreek-i-Labbaik Pakistan (TLP) will be placed before the cabinet next week.

The Cabinet will make a decision about the future of the TLP, he said.

To another question about Pakistan Peoples Party (PPP) Chairman Bilawal Bhutto-Zardari, he said that he is going to Kashmir but he is not ready to hear anything against “Billo Rani”.

He said that action would be taken against drug peddlers on a large scale in the capital city.