China and Pakistan are fraternal neighbors and all-weather strategic cooperative partners. The Chinese people refer to Pakistan by the endearing name of “Iron Pak,” meaning the China-Pakistan friendship is as solid as iron. The two countries established diplomatic relations in 1951. In the ensuing 70 years,thanks to the personal commitment of leaders of several generations and the wholehearted support of the people of both countries, China and Pakistan have forged an ironclad friendship.

In the 1960s, then Pakistani President sent a political adviser to Beijing to discuss the possibility of seeking China’s assistance in building a highway along the ancient Silk Road. Chairman Mao Zedong and Premier Zhou Enlai agreed without hesitation that China would do it together with Pakistan. It is what we now know as the Karakoram Highway, spanning a distance of 1,224 kilometers. With more than 600 kilometers in Pakistan built with Chinese assistance, it is the only land route between the two countries. It runs through the Himalayas, the Karakoram, the Hindu Kush and the Pamir Plateau. The environment in the region was extremely harsh: oxygen scarcity was the order of the day; avalanches, mudslides and earthquakes happened all too often. But none of these held back the heroic construction workers. One of them recalled risking their lives to work hanging in mid-air off the side of a cliff. They would tie one end of the safety rope to their waists, climb up a cliff and look for a sturdy rock or tree to fasten the safety rope. Then they would carry a ponderous pneumatic drill to drill holes on the rocks and put in dynamites to blast rocks and prepare the roadbed. All of these were done with the workers hanging in the mid-air. The hardship and danger was extraordinary. They often worked like this for hours without any water or a break, while keeping an eye on falling stones all the time.

It was with such dauntless spirit that construction workers from both China and Pakistan carved out of the frozen plateau a highway of friendship. Many Chinese workers gave their lives in the construction. 88 Chinese construction workers were laid to rest at the Gilgit Chinese Memorial Cemetery, guarding the highway built with their sweat and lives, and the ever-lasting China-Pakistan friendship. 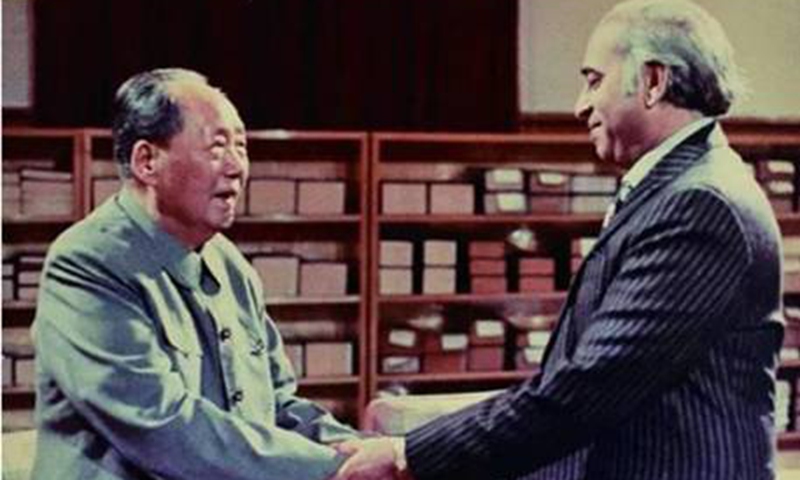 In May 1976, Pakistani Prime Minister Zulfikar Ali Bhutto paid a visit to China. At the time, Chairman Mao in his twilight years had difficulties speaking and walking. Nonetheless, he agreed to meet the Pakistani guests at his Zhongnanhai residence on May 27, and asked Bhutto about the development of Pakistan. That was the last time Mao met with foreign guests. After Mao’s passing, his undertakings were carried forward by his successors and the China-Pakistan friendship grew even stronger.

In 2008 when Wenchuan in Southwest China was hit by a devastating earthquake, Pakistan did everything it could to help. It immediately deployed all its military transport aircraft to send the entire strategic reserve of tents to China. The Pakistani staff even removed the seats on board and sit on the floor instead, just so that more tents could be delivered. For Pakistan, a strategic reserve of tents was no small expense. The Chinese Embassy in Islamabad more than once expressed the willingness to pay for the tents. But Pakistani officials, including the Chairman of its National Disaster Management Authority, just wouldn’t give a price. They said Pakistan-China friendship cannot be measured by money.

In 2010, when Pakistan suffered heavy floods, China quickly offered a helping hand, sending assistance to Pakistan by air and land. China sent out the largest medical rescue team in its foreign aid history, and for the first time sent its large-scale vehicle and helicopter fleets overseas to assist Pakistan. During the Yemen crisis in 2015, the Chinese Navy frigate Linyi evacuated 225 nationals of 10 countries from the Gulf of Aden, 176 of whom were Pakistani citizens. The saying “happiness shared is doubled and sadness shared is halved ” is a perfect illustration of the long-standing fraternity between China and Pakistan. 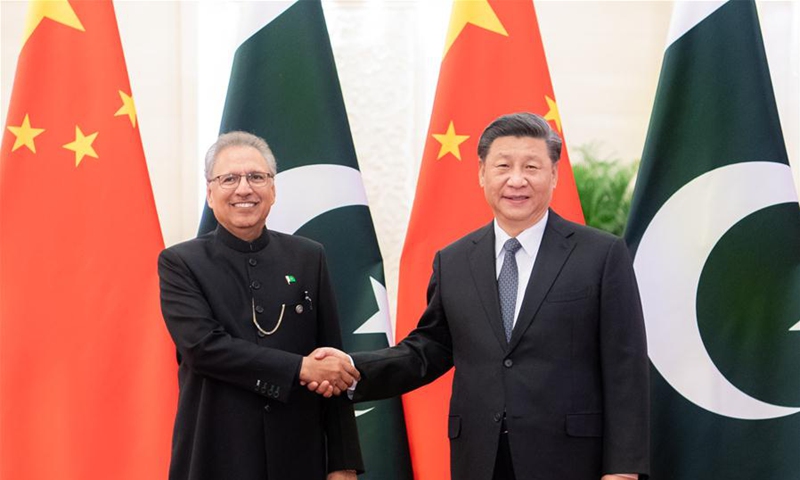 On March 17, 2020, President Xi Jinping holds talks with Pakistani President Arif Alvi at the Great Hall of the People.

Today, the China-Pakistan ironclad friendship, as solid as ever, has gained even greater significance in the new era. In 2015, President Xi Jinping paid a historic visit to Pakistan, elevating bilateral relations to an all-weather strategic cooperative partnership and opening a new chapter in the relationship. In terms of economic cooperation, the China-Pakistan Economic Corridor, as a major pilot program of the Belt and Road Initiative (BRI) and a demonstration project of bilateral cooperation, carries great significance to the in-depth development of the all-weather strategic cooperative partnership, to a closer China-Pakistan community with a shared future, and to the high-quality development of the BRI. The two countries also pulled together to fight COVID-19. Pakistani President Arif Alvi visited China from March 16 to 17, 2020 to express firm support when China’s battle against the virus was at its height. His interview with CGTN was heart-touching:We sent everything to China when it was hit by COVD-19. It is like friends do. We didn’t worry about what will happen in the future because our friends are suffering. When the pandemic hit Pakistan, China acted in the same spirit and provided considerable assistance to Pakistan, including funding temporary quarantine hospitals and sending medical expert teams and sharing experience in a timely manner. On February 1, 2021, the first batch of COVID-19 vaccines donated to foreign countries by the Chinese government reached Islamabad. And there are many touching stories of the two countries standing together to combat the virus. 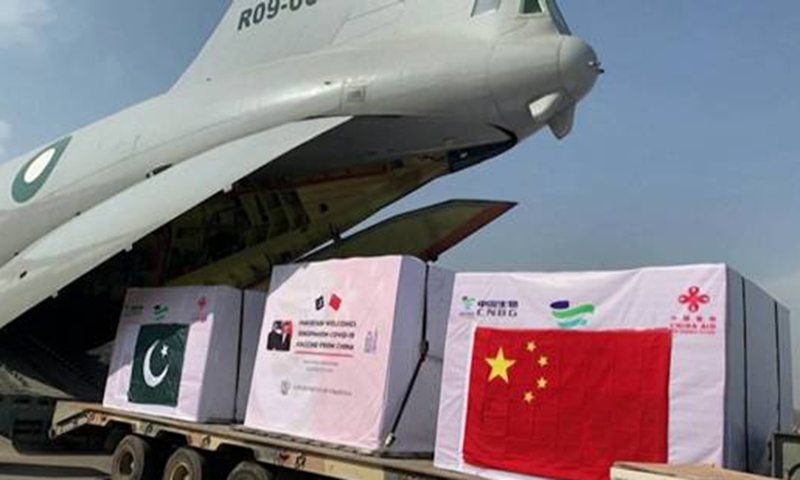 On February 1, 2021, the China-donated COVID-19 vaccines are delivered to Islamabad.

On February 1, 2021, the China-donated COVID-19 vaccines are delivered to Islamabad.

True friendship always stands the test of time. The Pakistani people hail the friendship with China as “higher than the mountain, deeper than the sea and sweeter than honey.” The Chinese people see Pakistan as “a good friend, good neighbor, good partner and good brother.” The year 2021 marks the 70th anniversary of the diplomatic relations between China and Pakistan. Over the past seven decades, the two countries, from “friends in need” to “friends of common development,” have always understood and supported each other, setting a good example of state-to-state relations. The founding father of Pakistan Muhammad Ali Jinnah once said “we are not afraid of the deep sea or the fire, because we believe in the sun and the future.” For China-Pakistan relations, we most certainly believe in an even brighter future and greater development of both countries.