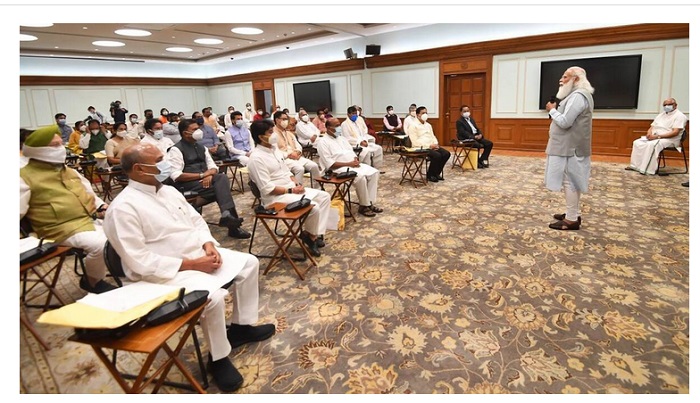 NEW DELHI: A new look Modi government will be unveiled on Wednesday evening as 21 new faces find their way into the Council of Ministers.

This will be the first big reshuffle of Modi2.0 and the names have been arrived at after much distillation and confabulations, looking at 2022 election scenario with five states, including Uttar Pradesh headed for polls.

The reshuffle is likely to be dominated by Bihar with Janata Dal United making a comeback followed by BJP nominations from Bengal.

The prominent names include Jyotiraditya Scindia, Sushil Modi, Sarbananda Sonowal, Narayan Rane and West Bengal BJP chief Dilip Ghosh who will be part of the massive reshuffle of the Union Cabinet.

The new Ministers in the Modi government who are likely to be sworn in include former Congress heavyweight from Madhya Pradesh, Jyotiraditya Scindia who is now in the BJP, former Bihar Deputy Chief Minister Sushil Modi.

Alliance partner and Apna Dal chief, Anupriya Patel from Uttar Pradesh are among the probables. Ladakh MP Jamyang Tsering Namgyal who impressed with his Parliament speech is also being considered.

The reshuffle is being necessitated by some vacancies caused due to deaths like Ram Vilas Paswan and exits of Akali Dal and Shiv Sena. Upcoming elections in UP is a factor in the reshuffle and also the need to add some heft to government with the entry of Bhupender Yadav, a strong organisational face.

Former Delhi BJP chief Manoj Tiwari is also among the probables. Along with Ghosh, Bengal MP, Locket Chatterjee and Shantanu Thakur are part of the contingent.

The JDU is likely to get 3-4 berths from Bihar as the BJP has accepted Nitish Kumar’s demand. The JDU will be represented by Lalan Singh, RCP Singh, Ramnath Thakur and Dileshwar Kamait and Santosh Kushwaha. Amidst the significant churn in Bihar, Pasupati Paras who rebelled against Chirag Paswan is getting a central berth.

Uttar Pradesh will be represented by several faces, including Sakaldeep Rajbhar, Rajya Sabha member and Ajay Mishra, MP from Kheri.

IANS (With input from Indian  Express)