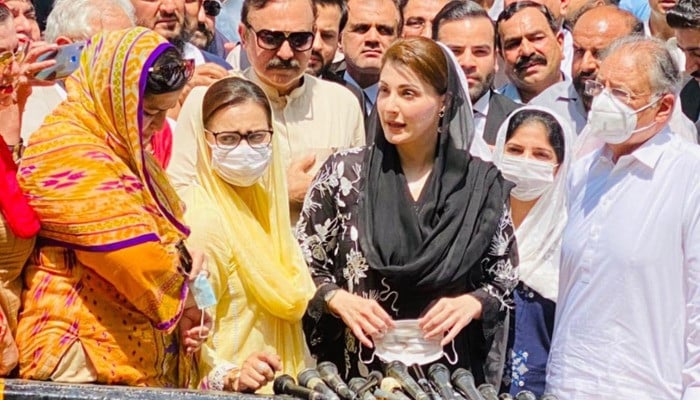 PML-N Vice-President Maryam Nawaz on Tuesday said that it “seems like the government is prepared to recognise Israel as a state”.

The PML-N vice-president, addressing a press conference in Islamabad, said that if this is contrary to the truth, then “why hasn’t the government issued a denial?”

“If you have taken a decision, then inform the people about it, as this is not a personal decision for you alone to make,” Maryam said to the government, stressing that the nation be taken into confidence in the matter.

Responding to a question, the PML-N leader expressed anger and rejected speculations of her striking a deal with the government. “ّWhy do you people always ask about deals in everything?”

I am not needed at places or events where PML-N President Shahbaz Sharif is in attendance, she said. It may be noted that Maryam was not present at the Pakistan Democratic Movement’s anti-government rally in Swat held two days earlier.

“PML-N is in a strong position in Azad Kashmir, and if transparent elections are held, then there is no doubt that the PML-N will win there,” Maryam said.

The PML-N vice president further said that the entire PTI “is at loggerheads with each other”.

“If the elections are held, their situation will be plain for all to see. This government will not come again when it leaves,” she said.

Maryam said that the choice must always remain with the people, when it comes to electing the country’s leadership. “In the case of Imran Khan, the nation has seen the result of such a choice,” she added.

‘Relations with Israel cannot be considered until Palestinian is independent’

Responding to Maryam’s statement Special Representative of the Prime Minister on Religious Harmony Maulana Tahir Ashrafi,  in a video statement, said that the premier’s stance on Israel “is clear”.

He went on to state that the world is appreciative of the stance of the government, nation and state of Pakistan over Israel.

Ashrafi said that the Palestinian president has termed PM Imran Khan’s position on the matter the act of a “brave man”.

“While politicising national commonalities, we must stay in touch with reality,” he said.

“The prime minister’s stance is that relations with Israel cannot be considered till Palestine becomes an independent state,” Ashrafi said.