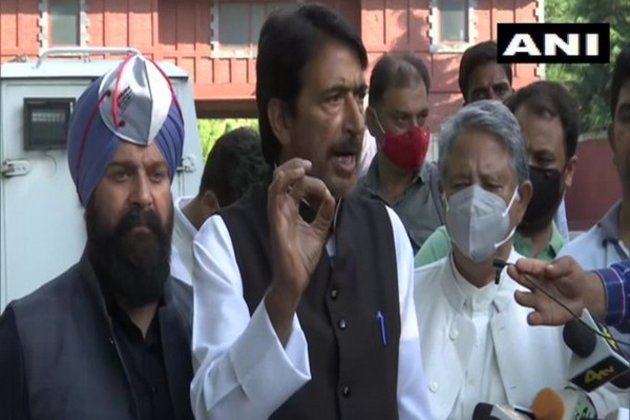 Srinagar (Jammu and Kashmir) [India], July 6 (ANI): Hours after leaders of different political parties of Jammu and Kashmir met the Delimitation Commission panel, Congress J-K chief GA Mir said that until the union territory’s statehood is not restored, the delimitation process will be of no benefit.

He also questioned that why is being delimitation process carried out in 2021 when it was scheduled for 2026.

On the contrary, Jammu Kashmir Apni Party said it is in favour of the delimitation procedure and it will fully participate.

He further urged all political parties of Jammu and Kashmir to participate in the delimitation process.

Speaking to ANI here today after the meeting, Maji said, “Process (of delimitation) has been started. We will not take a back step from this. What other parties are saying it’s their viewpoint and agenda. They (J-K-based parties) should take part in the delimitation process.”Leaders of different political parties of Jammu and Kashmir arrived at the hotel in Srinagar for a meeting with members of the Delimitation Commission on Tuesday.

The members of the Delimitation panel, who are in Srinagar for four days, will be meeting political leaders, district officers or Deputy Commissioners of 20 districts of the region and other stakeholders and gather ground-level information relating to the ongoing process of delimitation in the Union Territory.

Both Congress and BJP, along with Jammu and Kashmir’s Panthers Party had welcomed the move of the Election Commission and said they will meet the delegation and demand fair representation of all communities.

Earlier, the People’s Democratic Party (PDP) said it will not meet the Jammu and Kashmir Delimitation Commission, stating that the “outcome of the meeting which is widely believed to be pre-planned and may further hurt the interests of our people.”The Delimitation Commission, tasked with redrawing parliamentary and assembly constituencies in Jammu and Kashmir, is scheduled to visit the Union Territory from July 6 to July 9 and interact with administrative officials, political parties and public representatives there.

The decision to visit Jammu and Kashmir was taken after the panel held a meeting at the Election Commission office in the national capital on June 30.

Days after attending an all-party meeting convened by Prime Minister Narendra Modi in the national capital, the People’s Alliance for Gupkar Declaration (PAGD) has expressed its dissatisfaction over the outcome of the meeting.

The first meeting of the alliance after the Delhi meeting was held late Sunday evening at the residence of National Conference (NC) president Farooq Abdullah, who is also the chairman of the alliance.

PAGD spokesperson MY Tarigami told ANI that there has been an “absence of any substantial confidence-building measures” such as releasing political and other prisoners from jails. (ANI)