Special Assistant to the P.M. on Health Dr. Faisal Sultan on Monday warned that a “small but definitive” uptick in coronavirus infections had been observed in the past week and urged the public to continue adhering to SOPs to prevent the spread of the pandemic. “COVID data from last week show small but definitive uptick in cases, percentage positivity and other parameters,” he posted on Twitter. “Masks, avoidance of large crowds and continued vaccination remain crucial tools in this work,” he added. His warning comes less than a week after Planning Minister Asad Umar, who also heads the National Command and Operation Center overseeing the national response to the pandemic, had urged the public to not abandon SOPs, as indicators suggested a fourth wave of the pandemic could hit Pakistan. 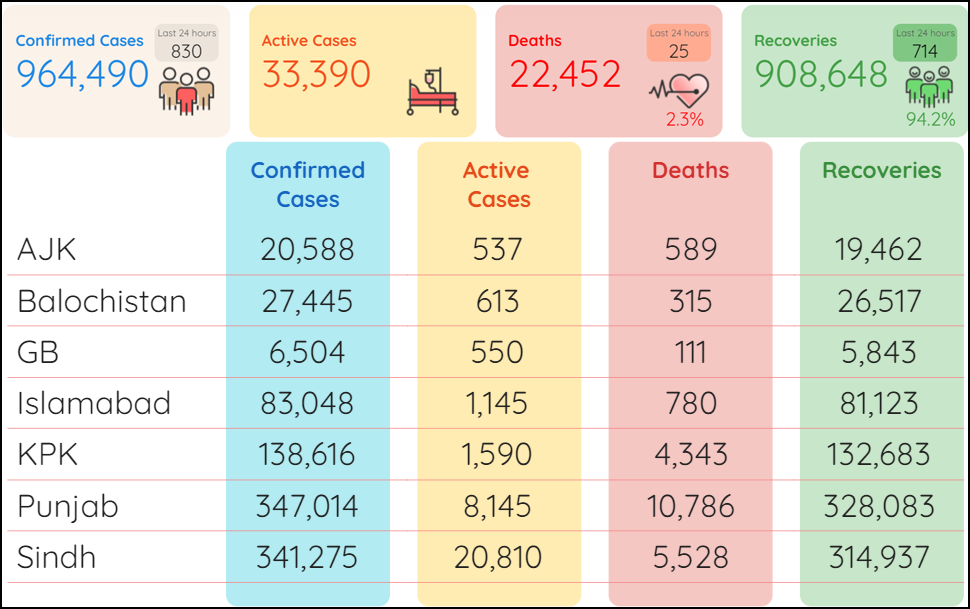 On Tuesday, authorities reported 10 deaths due to the coronavirus, raising total casualties to 10,786. The province now has 347,014 confirmed cases; it reported 162 new infections after conducting 17,488 tests, a positivity ratio of 0.93 percent. There were 107 new recoveries recorded, leaving 328,083 fully recovered, and 8,145 active cases of the virus.

In the past 24 hours, the provincial government recorded 83 new infections after conducting 7,184 tests, a positivity ratio of 1.15 percent. Overall, Khyber-Pakhtunkhwa’s confirmed cases have climbed to 138,616. It recorded 3 new deaths and 65 recoveries, raising toll to 4,343 and recoveries to 132,683. There are currently 1,590 active cases of COVID-19 in the province.

The province on Tuesday raised its confirmed cases to 27,445 with 26 new infections after conducting 529 tests for a positivity ratio of 4.9 percent. There were 3 deaths and 104 recoveries recorded in the past 24 hours, leaving 315 fatalities and 26,517 fully recovered. There are now 613 active cases of COVID-19 in the province.

Gilgit-Baltistan on Tuesday recorded 77 new cases of COVID-19 after conducting 385 tests, a positivity ratio of 20 percent; it now has 6,504 confirmed cases. The region reported no new deaths and 8 recoveries, leaving 111 fatalities and 5,843 fully recovered people. There are currently 550 active cases of COVID-19 in the region.

Globally, the virus has now infected more than 184,936,178 people, with over 4,000,779 reported deaths. After having passed through two waves of the pandemic, the world is divided between countries that are either in the midst of a third wave driven by mutated variants, or have launched mass vaccination drives that are allowing them to reopen safely. There are mounting calls, including from the World Health Organization, for “vaccine equality,” i.e. for developed nations to stop hoarding vaccines in excess of their requirements and to share them with the developing world to help curb the spread of new mutated variants, especially the Delta variant that is now driving the bulk of confirmed infections globally. Overall, around 169,312,213 patients of the 184.9 million+ infected have recovered thus far.