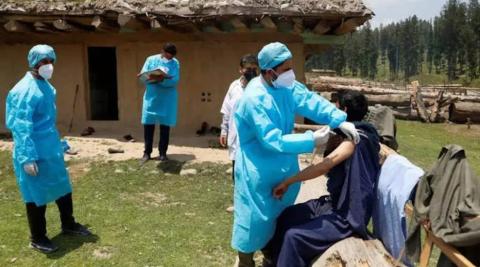 The ongoing Covid vaccination campaign has seen benefits percolate to aspects beyond boosting the health of those vaccinated and have become a symbol of India’s soft power, bolstering internal security by integrating distant border communities.

However, the renewed domestic vaccination effort has bolstered security. Usually, arms and armies are associated with border areas and villages facing hostile neighbors. But with the second wave of the Covid-19 pandemic receding in India, communities in strategically located border districts have shown how vaccination can not only effectively tackle the coronavirus, but also boost security by reinforcing their Indianness.

Incredibly, there have been no recorded cases of Covid-19 in the most remote villages of Tawang district of Arunachal Pradesh, bordering Tibet, and the districts of Leh and Kargil in Ladakh, all of which have a predominantly tribal population. Now, with vaccination, there is almost total immunization against the virus in these villages.

There are 75 people aged above 45 in Mago village, the most remote village in northeastern Arunachal Pradesh state, right on the border with China. Mago is situated 60 km from the nearest community health center (CHC) at Jang, and can only be reached on foot because the motorable road in that hilly, forested terrain is unusable. Yet every villager there has been vaccinated, except one man, aged 95, who has never had an injection in his life and refused the vaccine.

Teams of health workers walked for over seven hours, carrying equipment and the cold box with vaccines, to ensure all senior residents of Mago were immunized. The villagers had all been primed about the disease and the preventive vaccine and were aware of what was happening before the team reached. Nobody, except the 95-year-old veteran, hesitated to take the vaccine.

To reach these areas, teams of health workers walked equally long distances over streams and mountain trails. Armed with the electoral roll for each village, the team did a physical headcount and ensured everybody was vaccinated. The villagers were enthusiastic, especially when they were informed that Tibetan spiritual leader The Dalai Lama had been vaccinated.

Other villagers aged above 18, numbering around 120, got their injections on June 23, as they more than willingly took part at the day-long camp to protect themselves against Covid-19. So far not a single case of Covid-19 has been reported from these remote villages. Resident staff at local community health centers have helped keep the communities Covid-free.

This experience of boosting ‘soft security’ has been replicated in another set of border outposts in the country’s northwest, in the union territory of Ladakh. Everyone aged above 45 in Shun Shaday, Icthoo and Kargiyat, the remotest villages of Kargil district, have received one dose of the vaccine.

Health workers had to travel from the Primary Health Center at Zanskar, located 210 km from these remote border villages, about 8,000 to 14,000 feet above sea level, and walk half a day over rocky mountainous terrain to reach them. Here, there were ponies to carry the cold boxes – in which vaccines and other equipment are stacked – up the 60 km from Paudam, where ambulances have to be left as no further motorable roads exist.

Unlike other tribal districts of the country, residents of the remote villages in Leh and Kargil are relatively better educated and more aware of standard precautions required during the Covid-19 pandemic, like masking up and hand hygiene.

And since these villages have a “natural lockdown,” as Kargil Chief Medical Officer (CMO) Dr. Munawar Hussain Wazir said, being cut off from the outside world for six months due to heavy snow, not a single case of Covid has occurred in these villages. Villagers are keen to keep it that way. Now, with the vaccination available, there has been almost no hesitancy in taking the vaccine. Everyone aged above 45 has got a dose of the Covishield vaccine. Despite no incidence of Covid, villagers have fully cooperated with health authorities and workers to keep the disease at bay.

Contrary to popular perception, the experience has been the same in the union territory of Jammu & Kashmir where, despite incidences of Covid, there has been enthusiastic participation in getting vaccinated. Shopian,  synonymous in the media with militancy, and Ganderbal are two districts where there has been 100 percent immunization, said Dr. Saleem ur Rahman, Director General Immunization for J&K.  Everybody aged above 45 in Jammu, Naushera and Samba districts have also received at least one shot of the vaccine.

“Kashmiris are very health-conscious,” said J&K’s Information Officer Rehila Noor. “After the initial hesitancy during Ramzan, there is now no hesitation to come and take the vaccine.” Most maulanas (clergy) of mosques are already vaccinated and have been in the frontlines urging people to take the jabs, even making such announcements several times daily before the ‘azaan’ or call to prayer.

“This has been crucial, and now there is no problem, no militancy and no opposition to getting the vaccine,” said Noor.

The government’s vaccination outreach to remote border areas, in Kashmir and the Northeast, and the local people’s smiling embrace of these efforts was an indication of their comfort level and confidence in the Indian system. In doing so, people in these remote parts of India, who otherwise face such challenging weather and living conditions, have shown how security can be strengthened and the pandemic overcome in this vast country with a healthcare boost.

(The writer is a senior journalist and analyst. The views are personal. She can be contacted at [email protected])