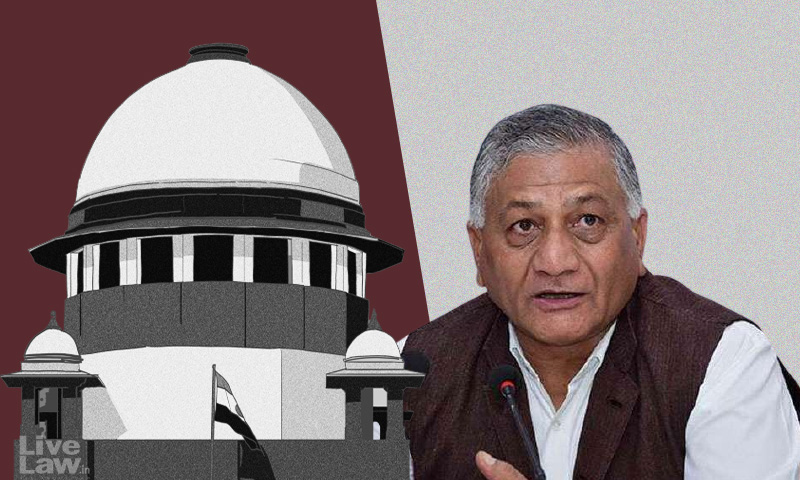 The Supreme Court on Friday dismissed a PIL for declaration of commission of breach of oath by Union Minister, General (Rtd.) VK Singh after he allegedly made certain unwelcoming remarks on the India China LAC issue.

The bench headed by Chief Justice N. V. Ramana was hearing a petition filed by activist Chandrasekaran Ramasamy in respect of a speech made by VK Singh on 7th February 2021 in Madurai, Tamil Nadu on India’s transgression on the LAC issue wherein Singh had allegedly said “…none of you come to know how many times we have transgressed as per our perception. We don’t announce it. Chinese media does not cover it… Let me assure you, if China has transgressed 10 times, we must have done it at least 50 times, as per our perception.”

General (Rtd.) V.K. Singh is presently serving as the Union Minister of State for Road Transport and Highways. He was also a former Indian Army Chief.

When the advocate for the petitioner argued before the bench that the minister had made comments against the armed forces, the CJ observed, “Somebody does not approve of comments made by a minister and so the solution is to file a petition in the Court to remove them? If he has done something, it is for the Prime Minister to act if it is inappropriate. The Court cannot pass any orders”

The petition alleged that the said speech was “intended to bring out hatred, contempt or disaffection and was an attempt to excite disaffection towards the Government established by law in India” and therefore was an assault on the unity and integrity of India and thus he committed a breach of his oath.

The petitioner states that the said comment is in variation of the official stand taken by the Indian government. The plea also states that after the said speech was made, Chinese Foreign Ministry’s spokesperson had termed it as an “unwitting confession by Indian side.”

“There was no immediate response from Indian officials to the Chinese foreign ministry spokesperson’s comments. Mr. VK Singh’s ‘unwitting confession’ on LAC situation weakens India’s global position, gives China chance to counter India. His comments also assume significance amidst the backdrop of the on-going border tensions due to which around 1 lakh Indian and Chinese troops are deployed in eastern Ladakh, and both sides are showing indications of having dug in for the long haul.” The petition states.

According to the petitioner, VK Singh’s comments that India has transgressed more frequently across Line of Actual Control than the People’s Liberation Army has not only given China a rare opportunity but has also contradicted India’s long-held official position on the subject.

“Amidst this, the replacement of Mr. Donald Trump by Mr. Joe Biden as United States president is another development with implications for India. Though Mr. Trump did take a couple of decisions that went against India on the trade front and on the issue of immigration, on foreign policy the Mr. Trump administration was unabashedly articulate in backing New Delhi in its tussle with China. But Mr. Biden, a more seasoned politician with decades of experience in foreign policy, is not expected to give India a carte blanche on issues that New Delhi considers its internal matter such as Kashmir and the farmers’ protest.”

It is also stated by the petitioner that VK Singh’s uncalled comments have given a “golden opportunity” to China causing “furore in political, diplomatic and strategic circles”.

While relying on the offence of sedition under sec. 124A of the Indian Penal Code, the petitioner alleges that by failing to maintain the secrecy of his path, VK Singh has accepted his “anti national offence” of making false and wrong statements against India, thereby voluntarily resigning his Ministerial post.

“Unfortunately, if either the voluntary resigning or removal of the government Minister post does not happen it is begged before the honourable Supreme Court of India to initiate suitable action against him as per the anti national law and set standard to people in higher position what and how to speak and give statements carefully and correctly.” The petition states.

“This is the highest necessity for India to be clean handed and inform the world and neighbours with no delay our right stand by enforcing needed action against a Minister who have given wrong and false statements which hinder the reputation of India. Otherwise there are certain chances of our soldiers and the forces would be demoralized and the view of the world community about India would be different.”

In view of this, the following prayer is sought by the petitioner:

1. Issuewrit of mandamus or any other appropriate Writ or Order or Direction or any suggestion or observation or particularly in the nature of Writ by giving direction to declare that Union minister Gen (retd) Mr. VK Singh committed a breach of his oath.

2. Pass such order and orders as this Hon’ble Court may deem fit and proper under the facts and circumstances of the case.