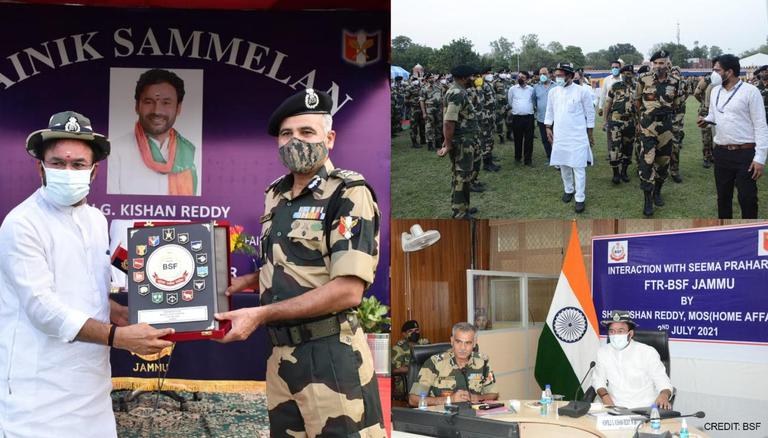 Minister of State for Home Affairs, G Kishan Reddy, on July 2, visited Border Security Force (BSF) headquarters in Jammu & Kashmir and interacted with officers across ranks and BSF personnel. The MoS was welcomed by NS Jamwal who is Inspector General of Frontiers Headquarters (FTR IG) in J&K. The MoS addressed the Sainik Sammelan of BSF too.

Attended & addressed the Sainik Sammelan of the @BSF_India at the Frontier Head Quarters in Jammu, today.

Had the opportunity to interact with several officers across ranks, serving in this distinguished CAPF.

Always an enriching experience to spend time with our personnel. pic.twitter.com/32mbO3Lsdh

During the visit, G Kishan Reddy held a meeting with FTR IG and other BSF officers to receive a detailed operational presentation on the current security situation on the Jammu border. The presentation by IG BSF explained the challenges on Jammu & Kashmir border and BSF’s robust domination plan in place to counter threats. He was also shown the different systems and innovations adopted by BSF to neutralise transborder threats from the counterpart side, BSF’s press release stated.

He also addressed a Prahari Sammelan wherein over 250 BSF officers and personnel were present to pay tribute to the martyrs of BSF who have made supreme sacrifice for the integrity of the country. MoS Reddy lauded the capabilities of BSF units that operate in difficult and different conditions be it snow-bound areas, or hot desert terrain, or difficult area of Rann of Kutch or malaria-prone stretches, or Naxal-prone areas.

During the Sammelan, MoS Reddy emphasized that BSF, being the First Line of Defence, for their excellent duty delivery on international border especially in J&K where eliminating threats from counterpart, such as infiltration, smuggling, drone attacks or tunneling, is essential.

Jawans have been rendering their services on the border with enthusiasm, GK Reddy commended their zeal and stated that it is a matter of pride for him.

Had extensive deliberations with the senior officials of the FTR – @BSF_India at Jammu today, as a part of the interaction with Seema Praharies.

During the visit, inspected various facilities available at the unit in Jammu & took stock of the several activities being undertaken. pic.twitter.com/8plqY5DmYD

Appreciating the recent success of Jammu FTR, wherein BSF troops successfully eliminated intruders from across the border and confiscated large quantities of Narcotics, and detecting underground tunnels on Jammu border. He complimented the BSF for shooting down an encroacher’s chopper carrying arms and ammunition at Samba border.

Acknowledging relentless support by PM Narendra Modi, MoS said that BSF had been provided with modern weaponry and state of art technology to effectively guard India’s international borders. Various welfare schemes by GOI like Ayushman Bharat, was mentioned. It is a national health insurance scheme of the state that aims to provide free access to healthcare for low-income earners in the country. Roughly, 50 per cent of the country qualifies for this scheme.