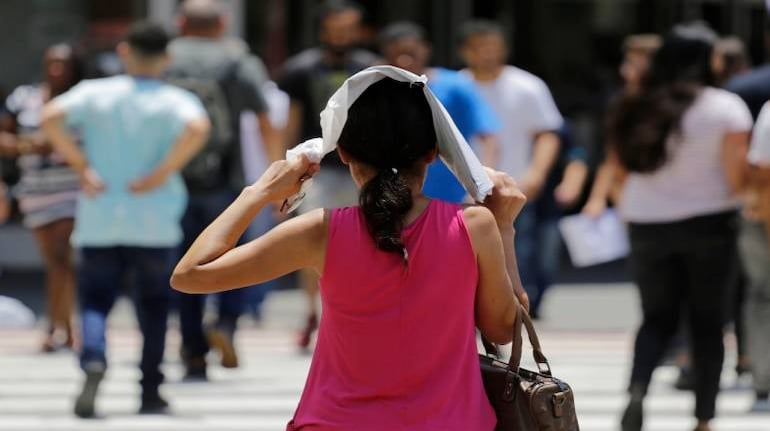 Because of global warming, Earth’s baseline temperatures have increased by 1 degrees Celsius on average since 1900. This is causing heatwaves to be hotter than those recorded in past centuries. (Source: Shutterstock)

Across the northern hemisphere, a number of countries are experiencing a historic heat wave that has shattered all-time temperature records in usually temperate cities. The blistering heat has also caused hundreds of deaths in Canada and the US.

According to the India Meteorological Department (IMD), the unending wait for rains and respite from searing heat in north India, including Delhi, is likely to stretch a bit longer as there are no favourable conditions for advancement of the Southwest Monsoon till July 7.

In addition to the blistering heat in north India, a number of places in the Himalayan region are also experiencing high temperatures with the mercury in Thoise in Ladakh’s Nubra Valley and Solan hill station in Himachal Pradesh soaring to 31 degrees celsius and 35.5 degrees celsius respectively.

What is a heat heat wave?

There is no universally accepted definition of a heat wave. According to the World Meteorological Department, heat waves are understood to be periods of unusually hot and dry or hot and humid weather that have a subtle onset and cessation, a duration of at least two-three days.

Because there is no absolute universal value, such as a given temperature that defines what is extreme heat, heatwaves are relative to a location’s climate: the same meteorological conditions can constitute a heatwave in one place but not in another.

Heatwaves are the result of trapped air. Normally air circles the globe in large prevailing winds, however, if it is trapped over one region it is allowed to warm to uncharacteristic temperatures due to sunlight.

The air is often trapped due to high-pressure systems. These systems force the air downwards, in effect acting as a large cap. With the air being trapped, it is unable to rise into the cooler upper atmosphere, therefore preventing precipitation. Heatwaves are generally the result of trapped air. They occur when a system of high atmospheric pressure moves into an area and lasts two or more days. (Image: News18 Creative)

Climate change is causing record-setting temperatures to become more frequent. Because of global warming, Earth’s baseline temperatures have increased by 1 degrees celsius on average since 1900. This is causing heat waves to be hotter than those recorded in past centuries.

The air over Antarctica has warmed more than twice that much. The United Nations on July 1 recognised a new record high temperature for the Antarctic continent, confirming a reading of 18.3 degrees celsius (64.9 degrees Fahrenheit) made last year.

The previous verified record for the Antarctic continent — the mainland and its surrounding islands — was 17.5C (63.5F) recorded at Esperanza on March 24, 2015.

Recent research has shown that warming of two degrees celsius could push the melting of ice sheets atop Greenland and the West Antarctic — with enough frozen water to lift oceans 13 metres (43 feet) — past a point of no return.

Globally, the decade to 2019 was the hottest recorded, and the five hottest years have all occurred within the last five years.

Deadly heat waves in Canada, US

Millions of people in western Canada and the northwestern United States are under heat alerts as the region baked in record-breaking temperatures and scores of deaths likely linked to the scorching conditions were reported.

Hundreds of heat-related deaths have been confirmed in Oregon, Washington and British Columbia.

In Washington and Oregon alone, authorities have attributed at least 90 deaths to the sustained spike in temperatures.

In Canada, British Columbia’s chief coroner, Lisa Lapointe, said her office received reports of at least 486 “sudden and unexpected deaths” between June 25 and 30. Normally, she said about 165 people would die in the province over a five-day period.

Environment Canada said the city’s heatwave would become less intense but unseasonably hot temperatures would persist for the remainder of the week. Source