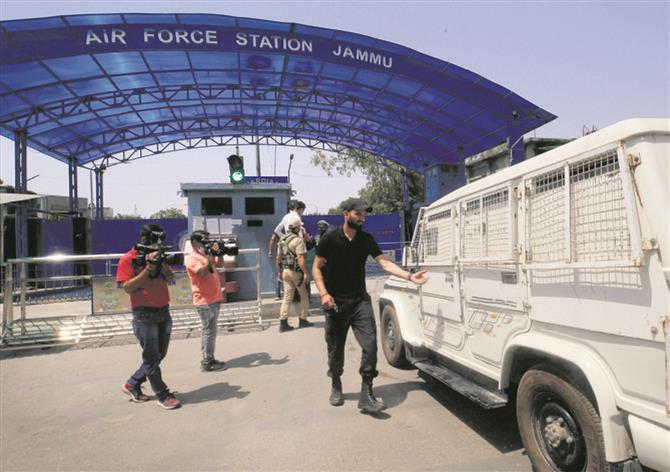 A drone was spotted hovering over a late-evening get-together on the Indian High Commission premises in Islamabad on June 26, a day before explosives-laden drones were used to carry out an attack on the Jammu Air Force station, the Ministry of External Affairs said on Friday.

Lodging a strong protest, India has asked Pakistan to investigate the incident. “We have taken up the matter officially with the Pakistan government and expect it to investigate and prevent breach of such security,’’ said an MEA spokesperson.

No proof given: Pak

Dismissing the claim as “preposterous”, Pakistan said Indian diplomats had not shared any facts to substantiate these allegations.

The Indian High Commission too has taken up the issue strongly with the Pakistani authorities through a note verbale. Sources said the drone was spotted twice over the High Commission’s premises around 10 pm when the get-together was in progress.

However, spokesperson of Pakistan’s Ministry of Foreign Affairs Zahid Hafeez Chaudhri dismissed the claim as “preposterous” and said Indian diplomats had not shared any facts or proof whatsoever to substantiate these allegations. Chaudhri went on to describe the allegations as “diversionary Indian tactics” and then diverted the topic to Kashmir by stating that Islamabad will continue to stand by the people of J&K in their “struggle for the right to self-determination”.

The drones over Jammu Air Force station and the Indian High Commission’s premises were the first such instances of unmanned aerial vehicles being used against government assets. The MEA said the Jammu drone attack was still being investigated and reiterated its demand to Pakistan for credible, verifiable and irreversible action against terrorist networks on its soil.

The BSF on Friday opened fire at a suspected Pakistani surveillance drone after it tried to venture into the Indian territory along the International Border (IB) in Arnia sector of Jammu region. Spotted around 4.25 am, the drone returned to the Pakistani side when the troopers fired half a dozen rounds to bring it down, said BSF officials.