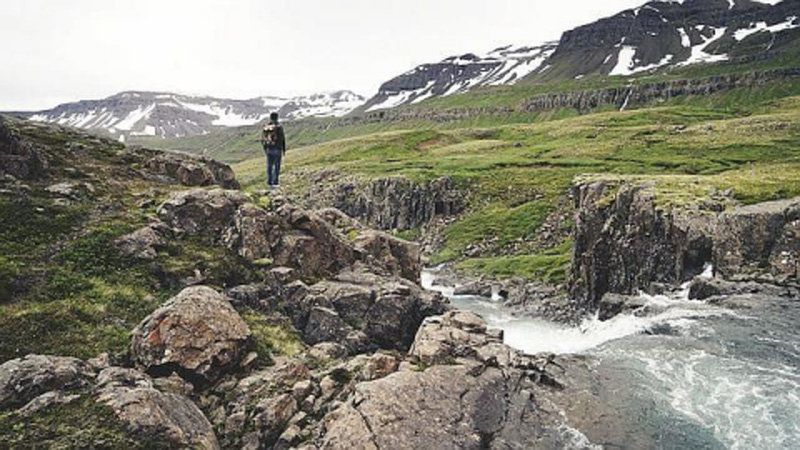 Bandipora/IBNS: The north Kashmir’s Bandipora district is attracting enthusiastic trekkers into the mountains.

A one-day trek to Datewass is lately gaining popularity among the amateur and occasional trekkers, who battered by back-to-back lockdowns are up to catch some fresh air apart.

Bandipora offers various destinations for the trekkers in the mountains surrounding the district by three  sides with Wular Lake covering it’s vast expanses too.

Datewass or Dadewass which falls in this north Kashmir range is a very small but lush green valley located  in the foothills of Harmukh mountain range of the Himalayas.

It is a source of various glacial freshwater streams cutting across Bandipora and Ganderbal districts,  among them is river Arin. The place is accessible via the upper reaches of Serender as well as Chittay Banday.

“We haven’t seen this much rush of locals trekking to the place before. Lockdowns in the plains is forcing people up for fresh air,” Yaqoob Bani, a middle-aged tribal at Detewass said. “Many people are  coming here mostly for the day.”

Yaqoob is moving up to the wider pastures with his cattle and so are another handful of tribals living in  the valley in log houses.

The tribals carry a special pass from the Army for hassle-free pasturing across the mountains.

“In my 10 years of trekking, it’s a rare sight witnessing amateur trekkers or just anyone without proper  knowledge scaling these mountains to reach here,” said Amir who leads a group of regular trekkers from  nearby Argaam village.

For these trekkers “the mountains are life”.

They said that they had been to almost every place worth trekking even higher in these mountains.

“Our trek last no less than a week but we were attracted to this new place which is a short distance from  our village and can be explored within a day,” they said.

With ease in the restrictions and no mandatory permission for the short treks in less volatile areas and  quite a distance from LoC, the exploration is gaining popularity.

The popular trekking destinations along the route are Lal Marg-Mohand Marg which fall in Ganderbal  district apart from Gangabal which is the base of Harmukh mountain and other places like Sherasar,  Kunzdoor, Sulban and Sheeri Farhad which fall on Bandipora side and remain mostly untouched.

Datewaas has remained hidden for quite long but, as per the locals, the place has its history and until  the early 2000s, much of the wood contracted by the government would be transported from here and  even has a road for off-road expeditions now left unused.

“Lumberjacks were stationed here and the place was happening but after they left the place deserted,  the location has not seen much activity,” another tribal Noor Muhammad said. With its reach, landscape and topography, Bandipora district connects its mountain passes with  Kupwara and Ganderbal districts.

However, the frontier Gurez valley, which shares the Line of Control with Pakistan administered Kashmir  and further connects with Kargil or Drass region of Ladakh has mostly remained out of bounds for the  trekkers.

However, lately the place has been witnessing an influx of tourists as the government officials began  campaigning for attracting more people to the destination.

The visits by actors like Akshay Kumar and other officials in the administration has brought it under the  spotlight.

Meanwhile, the locals have repeatedly called for an all-weather road tunnel to the place as it remains  cutoff for almost six months.

In Detwass, the tribals are packing to go to the higher grounds with cashless trade of milk, vegetables  and other stuff in exchange for even items that are not available in the mountains.

The increased number of people preferring to trek has also raised hopes among the tribals owning  ponies.

Zakir Meelu, who resides at Serender village, the last village connected with a road, has been receiving  requests to arrange horses to carry luggage or extra items high into the mountains.

“Some form of a seasonal business has a scope here, but the lack of communication or dedicated facility  to facilitate the visitors often puts us in a Catch-22 situation. Sometimes the ponies are already up in the  pastures and very less often we can arrange some for the trekkers,” he said.

Moreover, the demand for guides to show the route has also picked up.

“If ponies aren’t available, men carry the extra luggage and also come in handy for showing the visitors  the route. Though it’s very low-scale now, there is a tremendous potential for adventure tourism in  Bandipora which could be uplifted and developed properly,” Meelu said as a group of villagers nodded in approval.