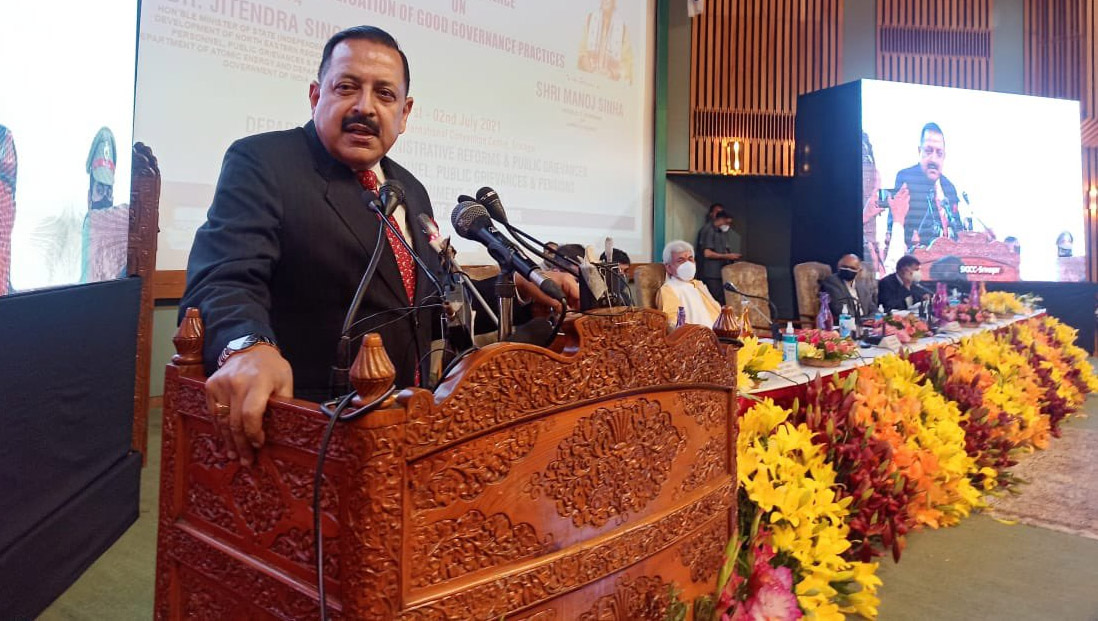 SRINAGAR: Union Minister of State (Independent Charge) Development of North Eastern Region (DoNER), MoS PMO, Personnel, Public Grievances, Pensions, Atomic Energy and Space Dr. Jitendra Singh said here today that the crucial Anti Graft Law namely the Prevention of Corruption Act, 1988, amended in 2018, and several people friendly and youth friendly reforms in governance, administration and selection for recruitment could be implemented in Jammu & Kashmir only in the last over one and half year after it became a Union Territory because earlier, the then State Governments were not keen to adopt many of these reforms.
The abolition of interview for Group ‘C’ & ‘D’ posts in order to draw a level play field to the job aspirants regardless of their socio-economic background was also introduced after it became a Union Territory even though the announcement had been made by non less than the Prime Minister of India Narendra Modi from the ramparts of Red Fort on 15th August 2015 and Department of Personnel & Training (DoPT) had issued the circular to this effect from 1st of January 2016.
Speaking after inauguration of DARPG’s semi-virtual Regional Conference on “Replication of Good Governance Practices” at Srinagar, attended by 750 officers from 10 States, Dr Jitendra Singh said that Modi Government is committed to Transparency and “Justice for All” and the people friendly reforms taken in the last seven years have benefitted the entire country including people of Jammu and Kashmir and Ladakh. Dr. Jitendra Singh cited several governance initiatives undertaken by Government for Jammu & Kashmir including the long pending cadre review, establishment of CAT benches, Extension of RTI Act, CPGRAMS and conduct the common eligibility test through the National Recruitment Agency at every district head quarter in Jammu & Kashmir.
Dr. Jitendra Singh brought forth the transformational changes pursued by the Government through the Mission Karmayogi, wherein Capacity building of 2,000 civil servants in collaboration between NCGG and IMPARD will be undertaken. He also cited massive reforms undertaken in grievance redressal and in the deployment of IAS officers as Assistant Secretaries on completion of probation period. He further cited the success of Aspirational District Program in improving the governance quality in India’s under-developed districts.
Dr. Jitendra Singh said that administration must reach out to the last man in the queue. He complimented the Government of Jammu & Kashmir for efficient COVID management and congratulated the Awaam of Jammu & Kashmir for community management of COVID-19 pandemic.
Dr. Jitendra Singh said that the objective of the Regional Conference was to familiarize officers with best governance practices. He said that under the leadership of Prime Minister Modi, India adopted the “Minimum Government Maximum Governance” paradigm which is being cited and commended all over the world with civil servants from across the world are visiting India to pursue internships. The relevance of Regional Conferences emanated from the view that Government should go out of Vigyan Bhavan to reach out to administrators in various States.
Dr. Jitendra Singh complimented the officers of DARPG for conducting the 2-day Regional Conference in Srinagar against all odds in continuation of the 3 previous conferences held in Jammu. This Regional Conference coming one week after the all-party meet chaired by Prime Minister with the objective of promoting grass roots democracy and provide impetus to development has considerable significance with the adoption of the conference resolution titled “Behtar Nizam e-Hukumat” that will seek to ensure justice for all persons and regions of Jammu & Kashmir.
On this occasion, Dr. Jitendra Singh announced the following DARPG-Government of Jammu & Kashmir collaborations. 1) Develop a District level Good Governance Index on the lines of the National Good Governance Index 2) Capacity building of 2,00 civil servants in collaboration between NCGG,IIPA and IIPA 3) A National Conference will be conducted on Governance in Jammu & Kashmir in the year.
Dr. Jitendra Singh released the DARPG’s e-Magazine titled ‘MINIMUM GOVERNMENT, MAXIMUM GOVERNANCE’ (MGMG), comprising of write-ups on Administrative Innovations during the Inaugural session. He also witnessed the exchange of MOU between NCGG and IMPARD for capacity building of 2000 civil servants.
The Regional Conference was also addressed by Manoj Sinha, Lieutenant Governor of Jammu & Kashmir, Sanjay Singh, Secretary DARPG, Arun Kumar Mehta Chief Secretary J&K and V.Srinivas, Additional Secretary DARPG.
The Regional Conference will be conducted on July 1-2, 2021 and will have 7 technical sessions with focus on Administrative innovations at Centre, State and District levels, innovations in Swachh Bharat Mission, Aspirational Districts Program, Annual Credit Plan. A special session on Administrative Innovations in Jammu & Kashmir will also be conducted in the Regional Conference to showcase the work done in Jammu & Kashmir.