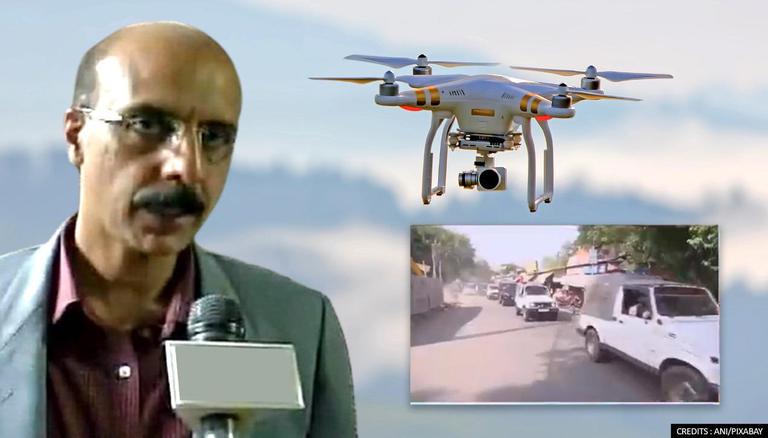 Director General (DG) of the National Security Guard of India (NSG) M A Ganapathy and DG of Central Industrial Security Forces (CISF) SK Saxena on Wednesday arrived at the Indian Air Force’s Jammu Airbase for the investigation of the Jammu Drone attack. After the attack, several massive steps have been taken in the entire bordering area of Pakistan in order to fight the drone menace. A ban has been imposed on the storage, sale, possession, use, and transport of the flying machines in the Rajouri area of Jammu.

The top brass went directly from the Airport to the police headquarters where a meeting was scheduled with the top officials of Jammu & Kashmir– ADG Jammu Mukesh Singh along with SSP Chandan Kohli. The DGs attended a two-hour-long detailed high-level meeting and were provided with all the details happening of the investigation by the police officials.

As the security of Jammu Airport is connected to the Indian Air Force station and falls under the jurisdiction of the CISF, that’s the reason why DG CISF arrived at the airbase. Several teams of NSG have been deployed including the national bomb data center team to carry out the investigation regarding the nature of the explosives used in the attack. NSG and CISF have further offered to provide assistance in order to make the Valley safe and IAF stations threat-free.

This attack is not only restricted to the Indian Air Force (IAF) but has now posed a serious security challenge for all the establishments across the country. As of now, Drone tracking devices, monitoring system, drone jammers have been installed inside the Jammu Air Force station. NSG troops have been deployed with the anti-drone guns and now anti-drone systems will be soon installed inside the IAF station in order to fight any possible air threat.

As the Drone threat has been increased across the country, a high-level meeting was chaired by Prime Minister Narendra Modi on Tuesday. The development comes in the aftermath of the drone attack on the Indian Air Force’s Jammu station, wherein two drones armed with IEDs caused blasts over the technical area. On Tuesday, Prime Minister Narendra Modi gave his approval to Defence Minister Rajnath Singh to expedite a policy on drones. According to sources, a unanimous clearance was obtained for expediting a policy on drones which had been pushed by the Defence Ministry and IAF on previous occasions as well.

PM Modi and Rajnath Singh also discussed futuristic challenges in the defence sector, equipping forces with modern equipment. Prior to his meeting with PM Modi, the Defence Minister met with officials and Air Force representatives to deliberate on a special policy pertaining to drones

Drone activity in Jammu after the attack on IAF base

A first of its kind, the drone attack in the premises of the technical area of the Jammu airbase led to two IAF personnel sustaining minor injuries. The case has been handed over to the National Investigation Agency. Two blasts were heard within a gap of 5 minutes, the first blast is captured in the CCTV at 1.37 am while the second was captured at 1.43 am. A team of Jammu and Kashmir police along with other security agencies and forensic experts rushed to the incident spot to further investigate the cause of the blast.

Hours later, two more drones were spotted over the Kaluchak military station in the wee hours on Monday. The drones hovering in the Jammu airspace were thwarted and were forced to fly back without causing any damage. Sounding a high alert across security installations and the bordering region with Pakistan, a high-level investigation team of the IAF was dispatched to Jammu after the explosions. The possible target of the drones is said to be the aircraft parked in the dispersal area just meters away. Defence Minister Rajnath Singh spoke to Vice Air Chief Air Marshal HS Arora regarding the blasts and Western Air Commander Air Marshal VR Chaudhary and Air Marshal Vikram Singh reached the spot to investigate the matter.