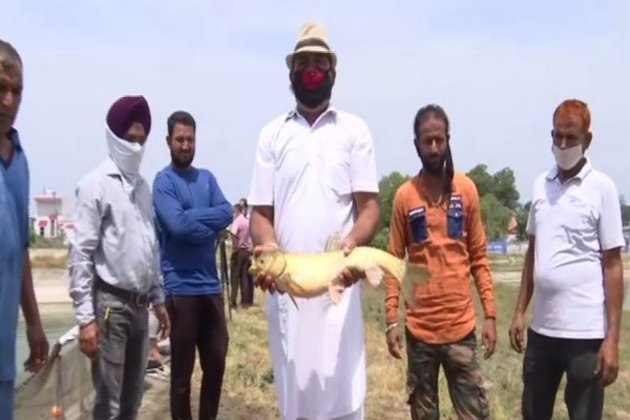 Farmers from Ghou Manhasa area have started pisciculture along with traditional farming to boost their income.

According to Mohammad Ashraf Darzi, Joint Director Fisheries (Jammu), under PMMSY, a subsidy of 40 per cent to 60 per cent is being given by the Department of Fisheries to the farmers who want to start fish farming.

“We also provide seed and feed for one year. Also, special training is given to the farmers who are starting pisciculture,” he said.

Kulbhushan Verma, Regional Development Officer, Department of Fisheries (Jammu) informed that earlier, the department was only training the farmers in fish farming, but now they are also being educated about broodstock management and hatcheries.

“Under PMMSY, we give on-site training to the farmers and also take them off-site locations across India. This way they learn about new techniques and improve from others experiences,” he said”Under the scheme, the government not only provides fish seeds to farmers for their personal ponds but also provides free of cost seeds for community ponds in the villages. At the end of the year, fish from the community ponds are auctioned and money is given to village panchayat. The landless farmers are also given a licence to catch fish from public lakes and rivers,” Varma added.

As per Deepak Singh, a farmer who started fish farming under PMMSY, pisciculture is not only easier than traditional farming but also far more profitable.

“I am a former Army officer. After retirement, I tried all sorts of options on my land. I tried poultry farming and agriculture but I got maximum profit from fisheries. Fish farming is easier and more profitable. There is also demand for fish in the market. I thank the Prime Minister for bringing the scheme as it’s very profitable for farmers,” said Singh.

Another farmer Aswini Sharma said the scheme could help them double their income.

“Earlier, I was doing traditional farming like my father and forefathers. Then, I tried something new and found fish farming very profitable. This is also easier and can be done by anyone. The government also helps in its establishment initially,” said Sharma.

“I wish more would farmers to come forward and try fish farming as it will be highly profitable for them. This will be a milestone for doubling farmers’ income,” he added. (ANI)