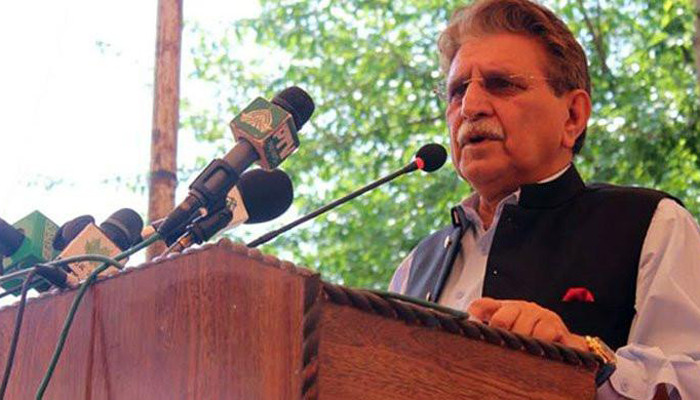 Azad Jammu and Kashmir Prime Minister Raja Farooq Haider said on Wednesday that it would be foolish for Pakistan to ask the US to arbitrate on the Kashmir issue with India.

“The government of Pakistan cannot take matters like this after India’s usurpation of occupied Kashmir on August 5,” said Haider while addressing a press conference in Islamabad. He said that giving speeches in the United Nations was not enough.

The AJK PM then said that it was foolish to seek America’s arbitration on the Kashmir issue.

“Pakistanis and Kashmiris lost their blood on the Line of Control. But our foreign minister is there to only tell stories to children,” said Haider.

Haider claimed that money laundering was happening in AJK and PM Imran Khan’s office was being used for that.

The AJK premier also spoke about the upcoming elections in the region. He said that the polls that will be held on July 25 are being fought on two ideologies, adding that one was of the PML-N’s and the other of the Opposition.

Haider, who belongs to the PML-N, is seeking re-election to the AJK Legislative Assembly.

The 11th General Elections of AJK will be held on July 25, the region’s election commission had announced earlier this month.

According to the schedule announced by Chief Election Commissioner retired Justice Abdul Rasheed Sulehria, the nomination papers will be filed by the candidates before the returning officers on or before June 6 up till 4pm while the scrutiny of nomination papers will be conducted the very next day am onwards and the lists of validly nominated candidates will be publicised on the same day.

The last date for filing appeals before the election commission against the acceptance or rejection of nomination papers by returning officers has been fixed for June 27 before 2pm, while the hearing of appeals will be conducted from June 28 to 29, with the decisions announced on June 30 and July 1.