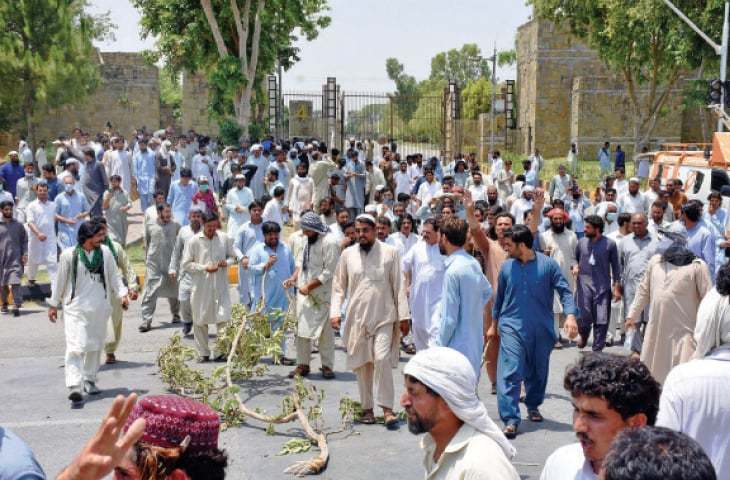 ISLAMABAD: Hundreds of people, who came to Islamabad from Khyber Pakhtunkhwa for vaccination, blocked 9th Avenue for hours during a protest on Wednesday after being told by staff at F-9 vaccination centre that they ran short of Pfizer and AstraZeneca.

Over 2,000 people moved towards the F-9 Vaccination Centre and police were unable to stop them, officials of the capital administration said, adding police’s failure to disperse the crowd might have proved counterproductive as the violent mob could have put the lives of the staff working at the vaccination centre at risk.

Two days ago about 3,000 people smashed the glass doors of the vaccination centre and stormed inside creating panic among members of staff at the centre. They were protesting against the shortage of Pfizer and AstraZeneca vaccines.

Officials of the capital administration said on both days, the police could not disperse the crowd. Like June 28, staff at the centre suspended their work on Wednesday due to the hostile situation and remained captive for hours, the officials said.

The crowed was annoyed when staff informed it about unavailability of Pfizer and AstraZeneca. The crowd later gathered at 9th Avenue, resulting in closure of the avenue from Shaheen Chowk to F-8 Exchange Chowk.

Officials of the capital administration negotiated with the protesters and informed them that the vaccines they were demanding were not available in the capital. After prolonged dialogue, protesters dispersed in the afternoon.

Operations at the vaccination centre resumed in the evening.

Deputy Commissioner Mohammad Hamza Shafqaat told Dawn that an MNA from KP brought the crowd to the capital. The protesters remained at the vaccination centre from 8am to 2:30pm.

Arab countries have made Pfizer and AstraZeneca mandatory for entry, the DC said, adding, staff members at the centres check the passport and visa of people before administering people with the vaccines but due to large gatherings it sometimes becomes difficult to check passport and visa of every person.

Meanwhile, 33 new Covid-19 cases emerged in the capital on Wednesday.

Officials of the capital administration said during the last 24 hours 1,900 tests were conducted and out of the total 19 men and 14 women tested positive. The positivity rate was 1.7pc, they added.

As many as 20 people tested positive for Covid-19 on Wednesday and 22 patients were discharged from hospitals after recovery during the last 24 hours. No casualties were reported in the district since the last six days.

In Rawalpindi district, there are 146 active patients. As many as 29 patients are in hospitals including seven patients who arrived from other districts and 117 patients are home isolated.

As many as 16 patients arrived from the garrison city including 11 from cantonment, two from Potohar Town and three from Rawal Town. One patient each arrived from Gujar Khan and Taxila whereas two patients came from Azad Jammu and Kashmir (AJK).

There is one patient on a ventilator in Rawalpindi, 20 are on oxygen support and nine are stable.

According to the District Health Authority, 714,994 people in the district have so far been vaccinated including 683,634 residents while 31,360 front line health workers have been inoculated.