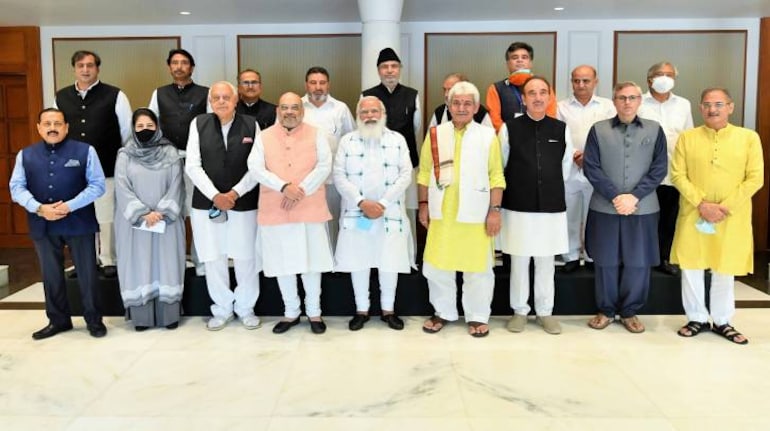 On June 24, PM Narendra Modi chaired the first high-level engagement between the Centre and J&K leaders since the scrapping of J&K’s special status in August 2019. (Image : @narendramodi)

The Delimitation Commission, along with Chief Election Commissioner (CEC) Sushil Chandra, will visit Jammu & Kashmir from July 6 to July 9 to interact with all stakeholders including political parties, Union Territory administration officials, and public representatives.

The announcement comes a week after Prime Minister Narendra Modi met 14 leaders from Jammu and Kashmir on June 24.

The ongoing Delimitation exercise, tasked with redrawing parliamentary and assembly constituencies in the region, paves the way for holding assembly elections in Jammu and Kashmir, which has been under Central rule since June 2018.

Read: Explained | Delimitation in J&K: Here’s all you need to know about the exercise

“During this period, the commission will interact with political parties, public representatives, and administration officials of all 20 districts of UT to gather first-hand information and inputs with regard to the ongoing process of delimitation as mandated under the Jammu and Kashmir reorganization Act, 2019,” a statement issued by the commission said on June 29.

The Commission headed by Justice (Retd) Ranjana Prakash Desai was constituted in March 2020, six months after the abrogation of Article 370 of Jammu and Kashmir. The commission was, in March 2021, given a one-year extension to complete its work.

At the all-party meeting on June 24, Prime Minister Narendra Modi and Home Minister Amit Shah urged leaders from J&K to cooperate with the Delimitation commission and set the electoral process in motion.

The commission already had series of meetings related to data and maps of districts and constituencies as per Census 2011, the Commission’s statement on June 30 said.

Also, read: Analysis | What happened at PM Modi’s meet with J&K leaders, what next

“The Commission expects all stakeholders will cooperate in the endeavour and provide valuable suggestions so that the task of delimitation is completed timely,” it said.

Before the erstwhile state was bifurcated into two Union Territories in August 2019, the effective strength of the Jammu and Kashmir Assembly was 87, including four seats from Ladakh, which is now a separate Union Territory without a legislature.

The Union Territory is expected to get seven more assembly seats after Delimitation taking the total number of seats to 114. So, post the Delimitation, the effective strength of the Jammu and Kashmir Assembly will be 90 seats.

Jammu and Kashmir has been under Centre’s rule since June 19, 2018, following the collapse of the coalition government headed by Mehbooba Mufti after the Bharatiya Janata Party (BJP) withdrew its support. Source