Twitter has quietly removed the world map from its career page which contained distorted map of India amid outrage. 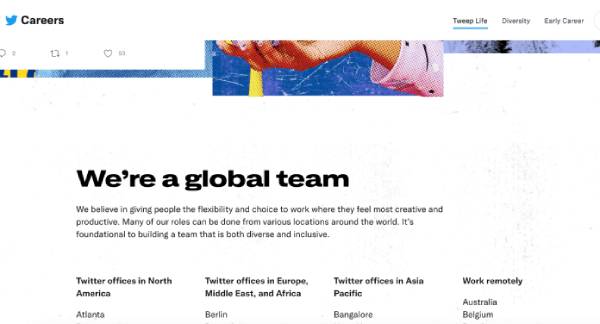 Earlier, right where the above portion is, an interactive world map appeared which had pinned various locations of offices in which India’s map was distorted.

As one can see, portions of Ladakh and Jammu & Kashmir were detached from the map of India.

Now when one scrolls down, the map portion is removed and directly countries and cities as location appears on the career page.

This is not the first time Twitter was has been caught using a distorted map of India. In October 2020, national security analyst Nitin A Gokhale found that Twitter had labelled the Indian territory of Leh in Ladakh as part of the People’s Republic of China (PRC). This was just weeks after India’s standoff with China at Galwan Valley, Ladakh. Back then, too, Twitter had later changed the map after apologising.

Recently, Twitter has locked horns with Government of India over the newly amended IT laws which makes it mandatory for social media platforms to take steps to ensure complaints raised against them are solved within prescribed period. Conditions like the appointment of an interim grievance officer and other regulations have irked the social media giant. By not following the regulations, Twitter has already lost its legal protection it enjoyed against content posted on the platform.

Twitter has till now not issued any apology or explanation on use of distorted map of India on its career page.

Twitter has once again invited trouble because of its irksome behaviour in India. In a fresh case, Twitter India Managing Director Manish Maheshwari has been booked under Section 505 (2) of IPC and Section 74 of IT (Amendment) Act 2008 for showing the wrong map of India on its website.

Twitter India Managing Director Manish Maheshwari has been booked under Section 505 (2) of IPC and Section 74 of IT (Amendment) Act 2008 for showing wrong map of India on its website, on complaint of a Bajrang Dal leader in Bulandshahr

The case has been filed on the complaint of a Bajrang Dal leader in Bulandshahr, Uttar Pradesh.

OpIndia has obtained a copy of the FIR. Praveen Bhati, a Bajrang Dal leader from Bulandshahr, has complained that the distorted map is a deliberate attempt by Twitter to mislead the world. He has added that by showing a distorted map of India where Indian lands are shown as Pakistani and Chinese territories, Twitter hurt the sentiments of Indian people and also has broken Indian law.

A massive controversy broke out after the social media giant posted a distorted map of India on the career section on its website. The map that appears on the ‘Tweep Life’ section shows Jammu & Kashmir, and Ladakh detached from India. While Jammu and Kashmir is shown as a part of Pakistan, the entire Ladakh was shown as Chinese territory.

BJP IT Cell in-charge Amit Malviya also lashed out calling out on Twitter for its irresponsible behavior. “This is not the first time that Twitter has got India’s map wrong and that’s perhaps the reason why intermediary guidelines mandate that social media and tech company employees should understand the local cultural sensitivities in territorial issues. I guess it is time to realise that there is inadequacy in compliance with the law of land,” he said.

Subsequently, Twitter pulled down the map quietly after the furor. However, this could not save them from legal trouble.

Moreover, Twitter has till now not issued any apology or explanation on the use of a distorted map of India on its career page.

This is not the first time that the social media platform has shown the courage to display the wrong map of India. In October 2020, national security analyst Nitin A Gokhale found that Twitter had labelled the Indian territory of Leh in Ladakh as part of the People’s Republic of China (PRC). Gokhale, the founder of Strat News Global, had marked his location as ‘Hall of Fame Leh’. However, the microblogging platform displayed the area as a part of PRC. The screengrab of the video read, “Nitin A Gokhale was live. Jammu and Kashmir, People’s Republic of China.”

We have received an affidavit from Twitter where they have accepted their mistake of wrongly geotagging a part of Ladakh & showing it as part of China & informed that they will rectify it by Nov 30:Meenakshi Lekhi, Chairperson,Joint Committee of Parliament on Data Protection Bill pic.twitter.com/9phvchRDRp

The government of India had issued a warning to CEO Jack Dorsey over the misrepresentation of the Indian map. Giving notice to Twitter, Secretary IT had said that such attempts not only bring disrepute to Twitter but also raises questions about its neutrality and fairness as an intermediary.

At that time, Twitter had reportedly apologised and had stated that they would rectify mistakes regarding India’s territorial depictions by November 30, 2020.

Twitter India MD Manish Maheshwari was expected to join the probe and appear before the Ghaziabad Police in connection with the fake hate crime made viral on the platform earlier this month. A case was filed against Twitter for failing to remove the fake news and videos being peddled on the social media site.

However, Maheshwari filed a writ petition before the Karnataka High Court against the notice issued by UP Police under Section 41A of CRPC and was granted interim relief from arrest.

After trying its best to evade the new IT rules proposed by the Government of India, Twitter had appointed an interim grievance officer.

However, the new grievance officer Dharmendra Chatur quit from his position after he was summoned by the UP Police along with Twitter India Managing Director Manish Maheshwari in connection with a manipulated video that peddled a fake hate crime.