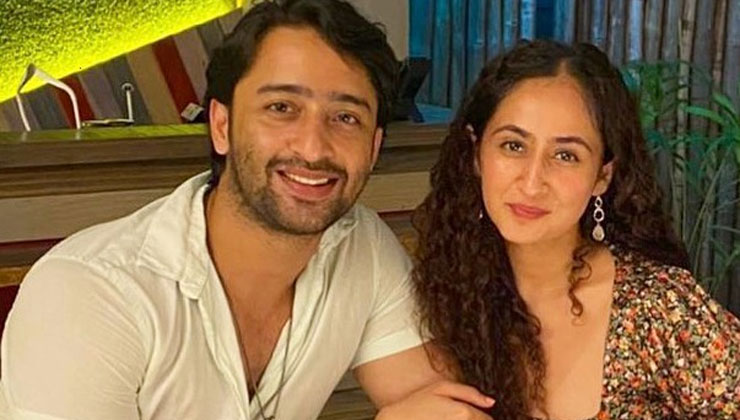 Shaheer Sheikh is currently on a vacay mood as he has been sharing some BTS pictures from his time in Ladakh with Mahabharat co-stars and friends. Before going, the actor seemed to have given wife Ruchikaa Kapoor a makeover by chopping off her hair. In a post today on Instagram, Ruchikaa flaunted her new haircut and gave courtesy to her husband Shaheer. Well, we are totally loving this new side to Shaheer post his marriage with Ruchikaa. It can also be remembered that only two days back Shaheer and Ruchikaa sort of made their pregnancy official.

In a picture shared by Shaheer Sheikh with his family, Ruchikaa’s Baby bump makes a debut. As per our sources, the couple will welcome their first child in the first week of September itself. Shaheer has been planning to wrap up his projects till then so that he can be by Ruchikaa’s side. Ruchikaa, in the meantime, has been attending work calls via Zoom and has been keeping herself busy. The actor was in Siliguri a few days back to shoot for Kuch Rang Pyaar Ke Aise Bhi: Nayi Kahani. Shaheer even shared a reel video with Erica where they did a trending dance and fans of KRPKAB couldn’t keep calm, for sure.

Shaheer Sheikh has been tight-lipped about the pregnancy so far but has not denied it either. He got married to Ruchikaa in November last year. The couple opted for a low key court marriage and had a few friends in attendance. They dated for a couple of years before taking the plunge. Shaheer rose to fame with Mahabharat, Navya, KRPKAB, Yeh Rishtey Hain Pyaar Ke among others. The actor is known for his impeccable acting chops and has a huge fan following in the country and abroad.

Also Read: Ruchikaa Kapoor debuts her baby bump in a sweet picture with hubby Shaheer Sheikh and her family