(The centrality of the Biden Initiative is the need for nations to unit.US-China rivalry has become acutely tangible post Covid 19 Pandemic. In actuality, the tussle precipitates between the ideas of a Free World as against a ruthless communist regime. The choice is ours. We either unite and act or remain passive and are enslaved. It is the ultimate fight of the ‘Good versus Evil’. There are ten major weaknesses of China, which the West or the ‘Good’ should exploit. Additionally, India’s role happens to be pivotal) 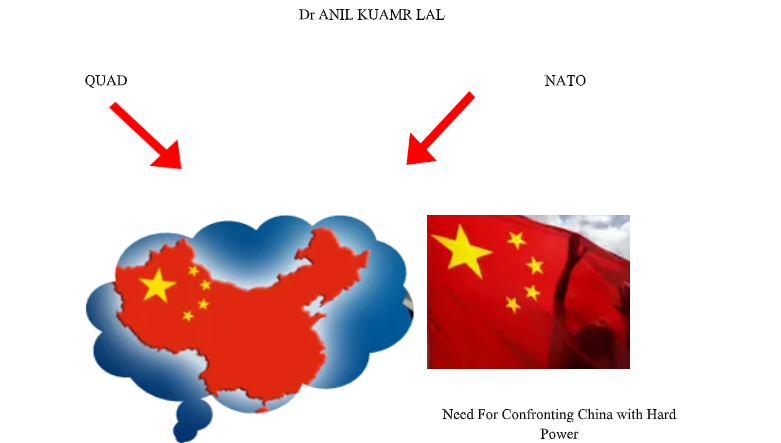 Nobody can bide time. Not even Biden, the President of the United States. Confronting China with hard power appears to be the only way forward. The creation of a ‘Frankenstein China’ of today is because of distorted and lob-sided policies of the United States since the Nixon era. Appeasement of China at the cost of the Russian empire was the only strategy that the Americans could think of. The result is there to see. China is rocking the world and self-declaring itself as the only global power today. All this is happening after an alleged Bio-Warfare agent type attack on the world to destroy the existing world order. Whilst the world is reeling under the destruction caused to the economy as all manufacturing, units and supply chains have been hit. Whereas, on the other hand, the Communist Party of China, is reaping an economic rise to the level of almost touching a 10% GDP growth. Further, due to pre-planned mechanisations it is filling the vacuum of new businesses and has almost captured the world market. The WHO and many other organs of the UN have been infiltrated by the Chinese through its economic clout. An impossible scenario has been rehearsed and managed through a well-executed plan by XI Jinping. He has shaken the world order and has already announced the arrival of China at the world stage.

The only way forward for the world is to seek more decisive and unified American leadership. Thereafter, collectively confront the rogue more squarely. Dilly-dallying and pushing a soft approach through diplomacy and positive engagement will only allow China to further consolidate its gains in South China Sea or in the economic arena. Unfortunately, this has been the American policy over more than two-decades. The result of this policy has allowed China to befool the West and ‘buy-spy’ to get niche technologies in the field of weaponisation and nuclearisation. In fact, this irresponsible behaviour by the West for petty business or trade benefits at the cost of accepting and strengthening a ‘Tyron Nation’ has backfired. Any more accommodation with China will only expose the US weakness. They (US/Europe) are bound to get subdued in due time for failing to check China. The time to confront China has arrived. Luckily, Biden is already making moves to regain its world supremacy.

India is one of the only countries in the world, which has taken a stand on the borders with China. This brave action by India has already blown the myth about China’s military strength and huge resources. If by chance, a war is triggered then China is bound to lose against India’s professional army as the Vietnamese have done, when China invaded Vietnam in 1979 and lost the war. The Americans can therefore now build up on India’s strength as India continues to dominate the Himalayas. Obviously, they will require full spectrum allied support including the operationalization of ‘QUAD’ in the seas. This overall configuration when defined in military parlance represents India as the pivot in the Himalayas and the maritime domain becoming the decisive arena of victory for the allied forces, akin to the ‘Hammer and Anvil’ (HAA) military strategy. Here the anvil would be the Himalayas and the Hammer would be the preponderance of the allied (QUAD) Naval supremacy. These navies together can shatter any other navy of the world. France, Philippines, New Zealand and some more nations have shown interest in such a formulation. When these two trade axes (CPEC &SLOC) are blocked then China is squeezed into economic paralyses. This can be called the ‘Nelson Hold Grip’ in realpolitik’s. The chessboard will then be controlled to coerce China to behave and respect the International laws and Freedom of the people. Frankly, the ‘HAA’ formation is already taking place, more due to China’s continued arrogant behaviour and rash belligerence. There is no doubt that the Chinese have miscalculated the entire sequence of events and the Indian and American spontaneous actions and alliance of other nations have stalled them. The 2+2 Dialogue has further shattered the Chinese dreams. Even if they now launch a massive military offensive, it will only result on them being overwhelmed by well-prepared defences and alliances. Such an attack will be the death knell for China in the longer run, especially when Tibet is again buzzing for independence. The Tibetans are well versed and motivated to create mayhem across the border. How can the chocolate soldiers of a well fed and air conditioned-groomed culture of the PLA, last against the hard core Tibetans. (The population of Tibet will join them and the situation may go out of hand).Ultimately it is the fight of Good over Evil. The Tibetan Special Forces are the best trained in the world to successfully operate in High Altitude mountains. They are proficient in Rock Climbing (without ropes) as well as in the Cliff Chop Assault technique to seize high peaks (The occupation of South Pangong Tso Heights during the present India-China standoff only testifies the same). They almost match the PLA Army Group strength and can operate North of the LAC. All the PLA logistics will then become dysfunctional along the 3000 KM range of Line of Communication from Mainland China.

Trump versus the Biden Initiative: Restoring the Situation

A candid analysis indicates that Trump during his presidency lost almost three years before coming to grips with the China threat. He wasted lot of time and effort on the West Asia and the North Korean issues. Had he correctly appreciated the threat, and had he spent the first three years in consolidating American influence around China’s perimeter then the picture would have been different. Actually, Trump wasted efforts on trivial and ignored the main threat. He missed the wood for the trees. Now when the Americans are trying to woo China’s periphery but these nations like Nepal have refused to even take aid from America, obviously under directions from Beijing.

On the other hand, Biden has almost reversed the failures of Trump and has been successfully tried to unite EU and America. In the recent conclusion of the G7 meet, Biden concluded: “America is back in the business of leading the world alongside nations who share our most deeply held values. I felt a genuine sense of enthusiasm that America was back at the table and fully, fully engaged.”

Finally, Let us identify some of the core Chinese weaknesses, which need to be exploited by democracies of the world together. First is the Human rights issue. The second is that the Chinese economy is entirely based on exports. The third is that its’ geopolitics and geography creates an inherent handicap (like in golf) in accessibility to free trade routes, through seas or the land (The OBOR/CPEC are land routes).China thus is vulnerable on this account. The fourth is food security. The recent floods have made 75% of irrigation lands submerged. This will affect China’s food security in due time. The fifth is the insurgency and dissent in Tibet and Uyghur. The atrocities are beyond human comprehension. Forced labour camps are producing cheaper fabrics and other goods due to zero labour cost. Resultantly; they sell the

cheapest goods and have thus captured the markets. It is not understood as to why no nation has raised objections on this aspect at the WTO.A collective ‘Out of UN action’ is now warranted voluntarily by these democratic nations to bar their imports. The sixth is that it is still not the world dominant military power. The US military forces will remain in the lead at least for the next 15-20 years or even more. The seventh is that the Chinese alliances are weak as against the US. China’s alliance with Russia, especially when it comes against India cannot work. In addition, the alliance support from Pakistan or North Korea is weak. The eighth factor is the governance model of a communist style of governance against a democratic free world approach. It has pitfalls as people are deprived of freedom. The ninth is the information is sealed behind an iron curtain. Face book or Google have all faced this control. It is question of time when this bubble of dissatisfaction can blow up. Tenthly and lastly, the personal fight within the CPC for leadership is well known in spite of Xi eliminating all his rivals for the time being.

It is now or never, as China has to be confronted. The American leadership is critical for this to happen. Otherwise, the global security and human survival with dignity and freedom is at stake. We should not see the same happen to us as what is happening today to Xinjiang Uyghur and Tibet. China’s ruling Communist Party on 29 October 2020 concluded its key annual conclave during which it approved the 14th Five-Year Plan and Vision 2035, a long-term development plan which observers say hints at the continuation of President Xi Jinping in power for the next 15 years. This is bad news for the world. It is high time that all democracies unite and ensure their mutual freedom.