Locals around the Pangong Lake in the Ladakh region have started protesting the careless behaviour of tourists. Recently, a Mitsubishi Montero got stuck on the bank on the Pangong Tso and it did take a lot of effort to get the vehicle out from there. The locals have protested against such tourists on social media platforms.

Yet another example of irresponsible tourists. Please save Ladakh 🙏 pic.twitter.com/hFff3GfPQW

The incident happened on June 27th when a Mitsubishi Montero with a Delhi registration number got stuck on the bank of Pangong Tso lake. The vehicle was parked in reverse and it got stuck due to the slippery condition. There are several videos of the incident that have now become viral. One of the videos show the vehicle trying to get out but the tyres did not have enough traction to come out.

Videos from other people show different angles of the vehicle and how badly it got stuck on the high altitude lake. Later, the vehicle was rescued by another vehicle, which pulled it out. However, the locals were not very happy with what the tourists do at the bank of the Pangong Tso.

Self-driven tourist spoiling the natural beauty of Pangong Lake, the wildlife Department is restricting only the local residing around the lake for their construction of road and buildings, look at this aren’t they destroying our lake? We are not here to clean your waste mind it. pic.twitter.com/svUdD69FE2

More such an irresponsible tourist at #pangong lake.

The locals have shown their disappointment in the authorities and the tourists. According to a post, the locals always request the tourists to not take the vehicles too close to the lake as they can get stuck and it destroys the bank too. However, on numerous occasions, tourists venture out without caring about the locals much.

The locals are also not happy because they are not allowed to construct permanent structures and roads for their stays and camps. The authorities keep a vigilant eye on such construction along the lake to make sure that the lake does not get affected by the human settlement.

However, the authorities do not have any vigilance around the lop the lake to stop the tourists from doing such things and destroy the lake.

Being a responsible tourist 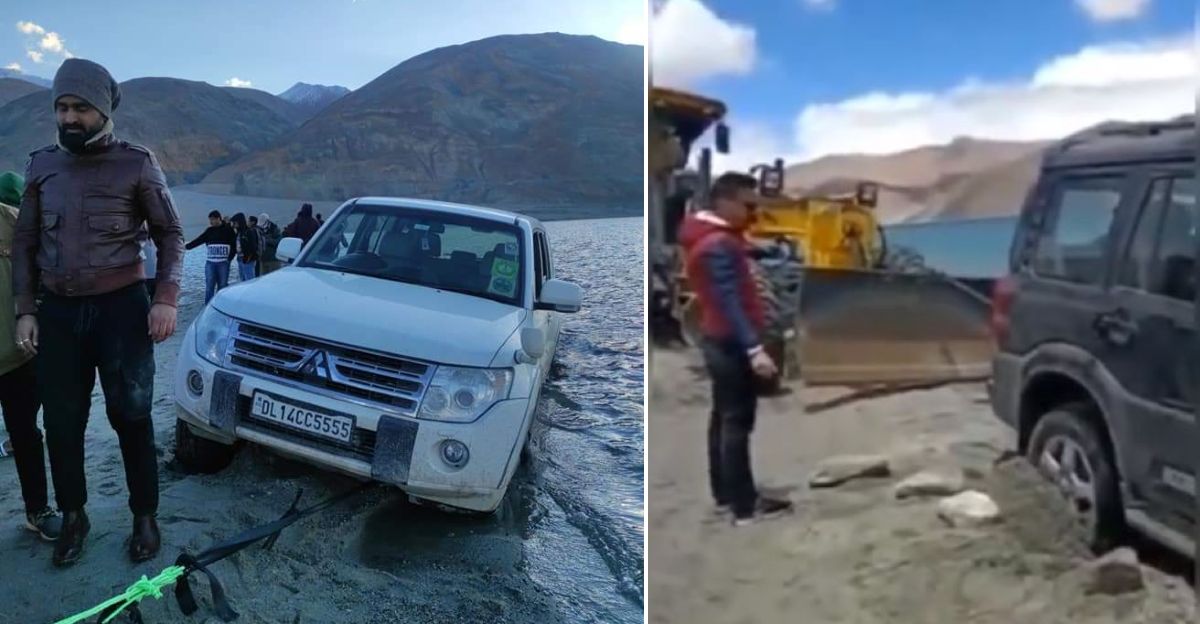 The Pangong Tso is a high altitude lake and it extends to Tibet. This is a holy lake for the Buddhists and even the locals of the region say that the lake is holy. That is why diving and taking a vehicle near the bank of this lake is not allowed. However, there are still many who defy these rules just to enjoy the moment.

It is not only about the Pangong Tso region but there are many such tourists spots across India where the visitors create ruckus regularly. While most of the locals do depend on the tourists to earn a livelihood, they remain quite unhappy about the behaviour of the tourists.

This is why one should always be extra careful while visiting the tourist spots and ensure that they follow all the rules of the region. When the tourists do not follow the rules and regulations, most locals and authorities take drastic steps like barricading the area or even not allowing people to bring their own vehicles. That is why everyone should be a responsible tourist.